When quotes from Scott Weiland’s recent interview this week started hitting the internet, it made for the perfect storm in the world of Velvet Revolver.  Just the week before, VR’s drummer Matt Sorum told the world that he, Slash and Duff had recorded an album’s worth of material with Slipknot frontman Corey Taylor.  While Matt thought it suited the Velvet Revolver moniker, Slash did not feel the same way and they decided not to release the album.  Two different interviews, hinting at one obvious conclusion- Velvet Revolver is coming back with Scott Weiland, the only way it could ever have.It’s been over three years since Scott Weiland, Slash, Duff and Matt parted ways.  It wasn’t a pretty break up, as it all pretty much played out on stage during a show when Scott infamously told the audience that the show they were watching would be one of the band’s last.  This was a surprise to the other members of Velvet Revolver, but let’s be honest, they probably weren’t too surprised by Scott’s antics at that point.  After what seemed to be a nasty break up, Weiland inevitably picked up the phone and got the boys in Stone Temple Pilots back together (what’s their names again?).  I saw STP on tour over the last two years a few times, and I have to admit that they were great.  In fact, their House of Blues Sunset show to benefit St. Jude’s Hospital was one of my favorite shows that year.  And it’s all because of Scott.  The ladies fawn over the slim I-may-just-die tonight rockstar.  By the time STP gets to Wicked Garden, he’s sweating up a storm, dancing like a possessed snake, and you just can’t take your eyes off of him.  He’s a rockstar- and that’s even when he’s playing STP material. 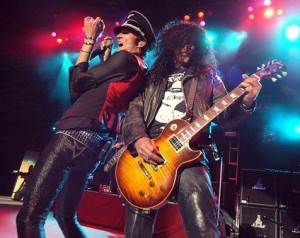 On stage together, Slash and Scott were perfect compliments to each other's talents.

Not to get on Chris Cornell too much, but would it hurt him to just move a little bit from the mic during Soundgarden shows?  So while Scott was off bringing Stone Temple Pilots back, the other members of Velvet Revolver were doing their best to keep busy.  Slash has been touring the world as a solo performer, and no matter what he does the dude kills it.  While Slash is awesome to see do his thing live in any aspect, he’s focused one being one of the world’s best guitar players next to an engaging lead singer (Axel, this doesn’t include you anymore).  Duff has been busy as well, trying to get his band Loaded off the ground.  While we have to admit we haven’t seen or heard much from Loaded, we did get to see Duff in a few surprise performances with Jane’s Addiction after Eric Avery decided to part ways with Jane’s again.  Duff absolutely killed it on bass when we saw him with Jane’s, and it truly felt like the right thing for Duff to be a part of.  Unfortunately, it didn’t last long, and Jane’s went on writing their new album without Duff in the fold.  That brings us to Matt Sorum, who from his quotes was ready to release the Corey lead Velvet Revolver album:

“Slash just didn’t see it like the rest of us did. We liked it. We had ten songs. [We] could put the album out tomorrow. It’s done. I said, ‘Let’s go.’ But Slash wasn’t feeling it. If we’re not all feeling it together, we can’t do it.”

While I haven’t heard a thing from that album, I’m going to go out on a limb and say Slash was right to keep it bottled up.  While Scott seemed to be fine with the Stone Temple Pilots gig, I can’t help but think that their attempt at releasing new material was a big reason why Scott is now open to returning to VR.  Their 2010 self-titled album was less than inspiring.  Even on the first listen, it felt tired and forced- not a good thing when you are trying to convince people you can create relevant music again. 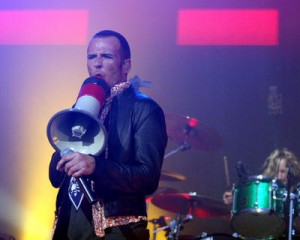 There is no denying the importance of the classic STP songs, but not even a megaphone could make the new material sound relevant.

So here we are now, with members of a once band all trying their hardest to stay relevant in the ever changing modern rock scene.  Slash, resting on the fact that he’s going to be badass no matter what, Duff bouncing around bands tying to find the right fit, Sorum trying to convince people that a Corey Taylor VR album would have been a good thing, and Scott probably bored out of his fucking mind playing “Hickory Dichotomoy” for couples in their late forties.

Perfect time for a Velvet Revolver reunion if you ask me!  The reason is simple, VR is the one band and entity that makes all of these guys instantly relevant again.  Velvet Revolver’s Contraband had a lot of detractor- critics who don’t like superbands anyway, and STP and GnR fans who couldn’t “just get over it”.  If you had a chance to see Velvet Revolver, you say one of the more legit hard rock shows to grace a stage bigger than 10 feet wide.  VR played with the snarl and vivacity of musicians trying to get noticed at the Viper Room, not rockstars tryig to make a buck.  While Libertad was a little too “easy” for my liking, it was a decent record that could serve as sophomore effort slump if you will.  All of that depends on VR coming back to make a third record, which I think they can do.  Even if they don’t come with a record, they have enough material to get back on stage right away.  VR had a lot of detractors, but they didn’t give a fuck.  They went for a dark hard rock attitude, and it worked.  Their window of opportunity may be closing fast on that, but there is still time for Velvet Revolver to be relevant and matter.  Nasty break up, allegations of drug relapse, failed side projects and reformations- is there a better back story for a return of Velvet Revolver?  Probably not.

“We patched things up and we get along. I see them every now and again, we text each other,” Weiland said in the interview. “And you know, we can never say never. Who knows, maybe we’ll do some shows some time.” 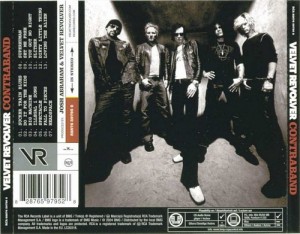 Getting back to the energy and sound of their debut album "Contraband" will be essential if a third album is going to matter.

That sounds to me like “some time” will be in 2012, with a few shows in Los Angeles and maybe hitting the festival circuit as a headliner next summer.  With two albums worth of material, and the ability to pull off 3-4 GNR or STP songs every night, it’s not like they need to work on any new material to be ready to play again.  I’m sure we will also hear right before the tour that yes, Scott did indeed fall of the wagon again with STP, and while things were “good” with the Stone Temple Pilots guys, Scott once again found an escape from the partying with his boys in Velvet Revolver.  It all makes perfect sense, and with every original member of Velvet Revolver currently having the perfect out with their current projects or still on hiatus waiting to get VR started again, the time is right.  Just don’t be surprised at the inevitable break up in 2014.  For now, enjoy one of those first songs from Contraband that told you right away VR would be something completely unique and different, “Do It For The Kids”: 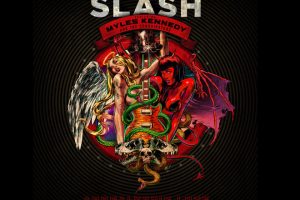 SLASH released “You’re A Lie” to radio today worldwide. The[...] 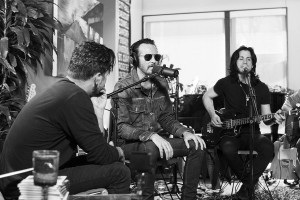 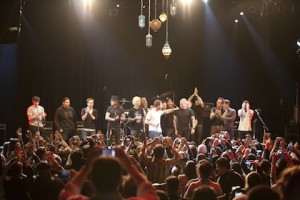 You have to hand it to Henry Rollins and Drop[...]