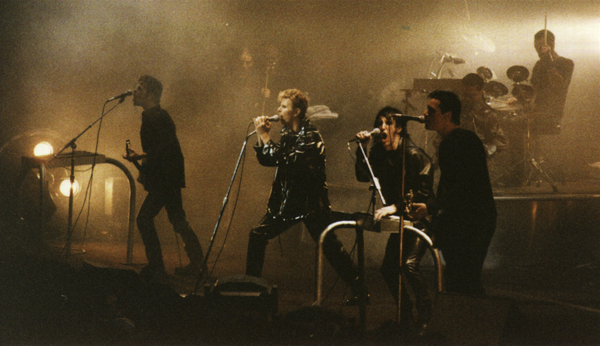 David Bowie passed away last night after an 18 month battle with cancer. Just two days before that, Bowie left us with his final gift – his 28th album Blackstar. If you watch one thing today, it should be the music video for “Lazarus” from the new album. If you watch a second thing, may we suggest this video of David Bowie and Trent Reznor performing hurt on October 6th, 1995 at the Nissan Pavilion in Bristow, Virgina. This performance was 1 of 27 shows across the United States as part of the “Outside Tour” that paired Nine Inch Nails and David Bowie as co-headliners. The tour ended at the Hollywood Palladium on October 31st, 1995.

According to an interview in The Hollywood Reporter, Bowie was one of the most influential artists in his career:

“Bowie is the most important figure to have inspired me… He has found an audience yet challenges that audience and continues moving forward in a fearless way.”

“Second to the Velvet Underground, there has never been better soul-lashing in rock…. It still sounds incredible today.”

“And that is it, really. Trent’s music, built as it is on the history of industrial and mechanical sound experiments, contains a beauty that attracts and repels in equal measure: Nietzsche’s “God is dead” to a nightclubbing beat. And always lifted, at the most needy moment, by a tantalizing melody.”

We could write so much more about the David Bowie and Trent Reznor relationship, but we will save that for another day. For now, enjoy.