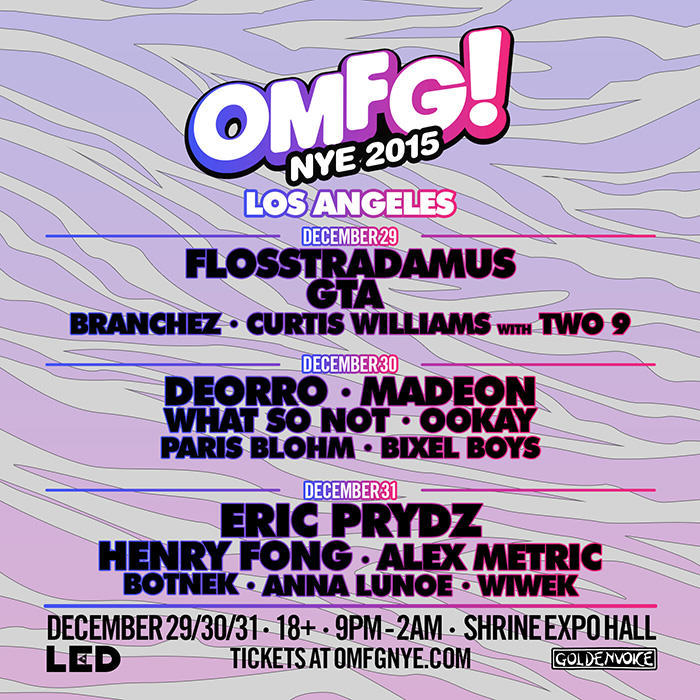 OMFG! has become one of Los Angeles’ most massive New Years Eve dance parties, and that party just hit a whole new level of craziness in 2014.  What was once a single night of EDM stars has evolved into a three day nighttime festival in Los Angeles.  If that wasn’t crazy enough, they even have the New Years Eve headliner, Eric Prydz, doing a back to back double that has him in LA for the NYE and then San Diego at 3:00 AM to close down the SD version of the party.  Ya, insanity.  So while there are a ton of OMFG parties to attend this NYE week in Los Angeles and San Diego starting on December 29th, we got tickets to giveaway to what we think is the best and biggest party of them all- December 31st at The Shrine in Los Angeles with Eric Prydz, Henry Fong, Alex Metric, Botnek, Anna Lunoe & Wiwek.  Want to win tickets to this one-night danceathon?  Here’s how…

You can increase your chances of winning by leaving a comment on this page in the comments section below and also by emailing us at Tickets@RabbitsBlack.com with “OMFG” in the subject line. Please included your Facebook username in the e-mail so we can validate your entry. Tell us why you want to go to the show!

You DO NOT have to enter through each entry point. You must Like Rabbits Black on Facebook in order to claim your prize. Using more than one entry point will increase your chances of winning. Winners will receive a pair of tickets to the show. The winners will be announced on December 25th on the Rabbits Black Facebook account.

Grab tickets to the show with the link below. It’s NYE people, you don’t want to take too many chances… or do you?

I hope I can win these tickets to take my best friend to her second event ever!!! We went to our first one thsi year and to end the year here would have us be the happiest ever!
My name on fb is Karlos Oshoa for certain reasons but its really spelled Carlos Ochoa

I want to win because I wanna be able to see the lovely anna Lunoe ???????????? please let this happen ????.
Here’s my fb https://m.facebook.com/looksliketherealthing
Or find me under : carlos Ivan Ibarra

Would love to bring in the new year with you guys!

I want to win this to see my WCW Anna Lunoe get down! It’d be a great way to close out an amazing year of music for me with Eric Prydz himself!

I have been dying to go to this event for so long but my friend can’t afford a ticket to go with me!! I would love to get him a ticket so I can finally go!