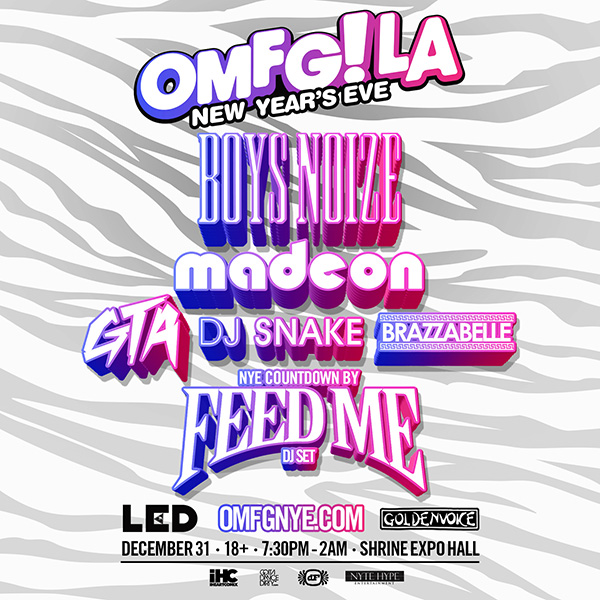 New Years Eve is two weeks away!  Kind of crazy right?  It feels like we were still at the beach in Santa Monica not that long ago listening to Jimmy Cliff as the sun set around 8 PM over the Pacific Ocean.  Now it gets dark before you leave work and it’s freezing outside (just joking, it’s 72 degrees before 11 AM this morning in LA).  So while it might be getting darker outside, it’s about to get real bright inside at the Shrine on New Years Eve.  Dance music production house LED and So Cal promoters Goldenvoice are going big and bright for NYE 2014 in LA.  The two are taking over the Shrine with some heavy hitters of dance music.  Headlined by Boys Noize and with a special midnight countdown by Feed Me, OMFG! is going to be one of the biggest parties in LA on December 31st.

We want to put you in the party, with all the glowsticks your heart and mind can handle.  Here’s how to get in on New Years Eve completely comped by your friends here at Rabbits Black:

There are four different ways to enter.  You DO NOT have to enter through each entry point.  Using more than one entry point will increase your chances of winning.  Winners will receive a pair of tickets to the show.  THIS CONTEST IS FOR THE DECEMBER 29th SHOW ONLY.  The winners will be announced on December 26th on the Rabbits Black Twitter and Facebook accounts.  It’s easy to enter, and you can enter as many times as you like through any of these entry points:

Entry Point 3: Hop on Twitter and send us a tweet.  Make sure you include @RabbitsBlack and @Goldenvoice.

Entry Point 4: Email us at tickets@rabbitsblack.com.  Make sure to put “OMFG” in the subject line.

It’s a packed lineup for your party to close out 2013 and ring in 2014.  Your ears will still be ringing well into the new year.  If you don’t want to take your chances for the biggest party night of the year, we don’t blame you.  You can still buy tickets at the link below: