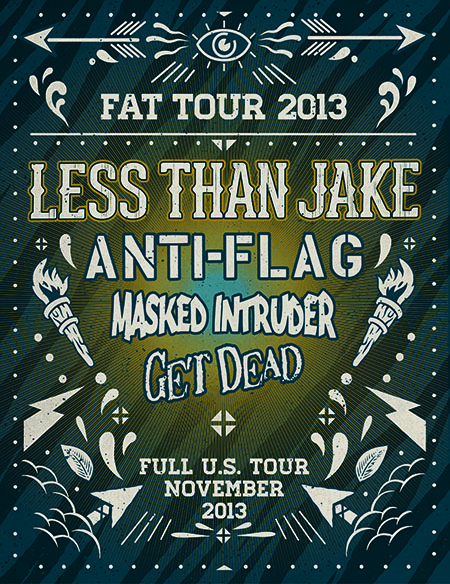 It’s been five years since Less Than Jake have released a full-length album but that all changes next week with the release of See The Light.  The 7th full-length studio album will be out on November 12th and the band is hitting the road for the FAT TOUR this fall.  The tour stops in San Francisco at Slim’s on the 29th of November and then heads down to Los Angeles at the Fonda Theatre on the 30th.  The FAT TOUR is being headlined by Less Than Jake, but it’s rounded out by three other awesome bands on the Fat Wreck Chords label- Anti-Flag, Masked Intruder and GET DEAD.  Make sure to show up early to see the San Francisco punk rockers GET DEAD.  The fivesome is one of our favorite bands on the tour.

A new Less Than Jake album, GET DEAD on tour, and Anti-Flag with Masked Intruder?  Sounds like a lot to celebrate on the FAT TOUR.  If you want to be there for the Los Angeles show, we’ll try to help you out.  That’s because we are giving away tickets to see the FAT TOUR at the Fonda Theatre on November 30th.  It’s simple… we promise.

There are four different ways to enter.  You DO NOT have to enter through each entry point.  Using more than one entry point will increase your chances of winning.  Winners will receive a pair of tickets to the show.  The winners will be announced on November 26th on the Rabbits Black Twitter and Facebook accounts.  It’s easy to enter, and you can enter as many times as you like through any of these entry points:

Entry Point 3: Hop on Twitter and send us a tweet.  Make sure you include @RabbitsBlack, @LessThanJake, and @GetDeadMusic.

Entry Point 4: Email us at tickets@rabbitsblack.com.  Make sure to put “FAT TOUR Contest” in the subject line.

Some people just can’t handle the pressure, and that’s alright.  You can still get tickets for the show at the link below.

We know Less Than Jake’s return is the marquee grabbing story here, but don’t miss out on Get Dead.  Here’s the band in the music video for “The Process” taken from their 2013 album Bad News.

There’s a ton of shows on the FAT TOUR at Rabbits Black hubs across the country.  For San Diego, Las Vegas, Chicago and more, check out the Fat Wreck Chords tour page.

Tags: Get DeadLess Than Jake