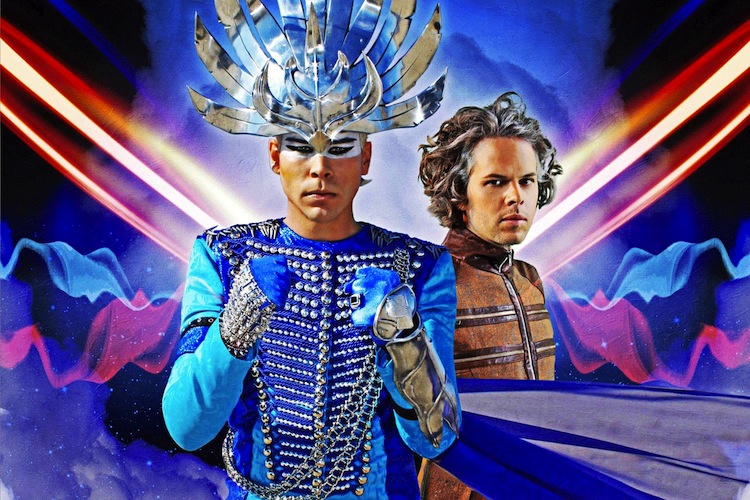 Empire of the Sun are experiencing a new level of popularity in 2013 that far surpasses their previous heights.  “Alive” one of a handful of songs that could be considered the track of the summer.  Luke Steele and Nick Littlemore combine to make an interesting sound of electronic, new wave with pop sensibilities.  Don’t be surprised if Empire of the Sun becomes a hit machine soon- they have the pedigree and appeal to do so.  Along with an accessible sound, the duo put together a visual live performance that entertains and also takes the audience into a new world built around the bright lights of dance music and the performance art of theater.

Empire of the Sun knows how to entertain, and with a special Halloween performance at the Shrine on October 31st, they’ll be taking the stage with an even bigger production.  Want to get in?  Looking for a Halloween party that will take you to another world?  Use the entry points below and win two tickets!

There are four different ways to enter.  You DO NOT have to enter through each entry point.  Using more than one entry point will increase your chances of winning.  Winners will receive a pair of tickets to the show.  The winners will be announced on October 25th at 3 PM PST on the Rabbits Black Twitter and Facebook accounts.  It’s easy to enter, and you can enter as many times as you like through any of these entry points:

Entry Point 4: Email us at tickets@rabbitsblack.com.  Make sure to put “Empire of the Sun Contest” in the subject line.

Tickets are still available for the show at the link below for now.  Halloween night in LA definitely has a high sell-out risk.

EMPIRE OF THE SUN! I cant imagine a better way to spend Halloween than with this amazing group!

Humbly hoping for tickets! They put on an amazing show.

This will be my first Halloween living in LA. Please pick me so I can “Alive!”

I hope I can win tickets!

Christa… get back to us! info @ rabbits black. com

WoW Please choose me for this contest!

Please pick me I could really use these tickets right now!

It’s Empire of the Sun! Who wouldn’t enter?!
It would be pretty amazing to finally get to see these guys live! 🙂
Here’s my entry/comment.