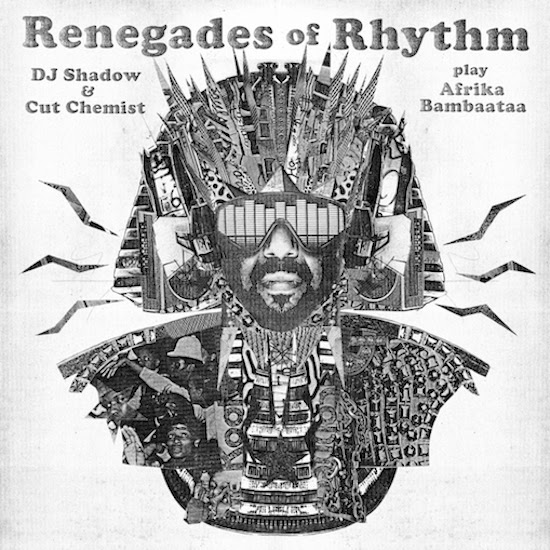 The legendary DJ Shadow and Cut Chemist are touring the US in a special tribute to godfather of hip hop Afrika Bambaataa. The historic Renegades of Rhythm tour will pull from Bambaataa’s personal collection of over 40,000 vinyl records.

Back in the late 70’s, Bambaataa was a well-known block party organizer and DJ/producer in New York City. He went on to make futuristic techno pop-hip hop inspired by Kraftwerk and in 1982 laid down the seminal hip hop classic album, Planet Rock.

While “Planet Rock” and its follow up, “Looking For The Perfect Beat” were hugely influential to hip hop, Bambaataa turned his focus throughout the 80s from electro-oriented rap to fusion, making tracks with Sex Pistol’s John Lydell (yes, Johnny Rotten), James Brown, George Clinton, UB40, and even Boy George. In that time Afrika Bambaataa also founded the Zulu Nation collective, which included such artists as De La Soul, A Tribe Called Quest, Queen Latifah, and the Jungle Brothers, and inspired dance styles popular throughout the 80s and 90s such as Detroit techno, Miami bass, and even Chicago house.

Throughout the Renegades of Rhythm tour, DJ Shadow and Cut Chemist will be spinning solely from records from Afrika Bambaataa’s personal collection of over 40,000 vinyl.

They’re HIS records, with his blessings. This isn’t just ANY copy of ‘X’ breakbeat, it’s THE copy, THE copy that started everything. Not just any records, the MASTER OF RECORDS’ records. – DJ Shadow.

Renegades of Rhythm comes through California at the following locations next week:

“Organ Donor” was the first song that really got me hooked on beats and instrumentals. DJ Shadow basically shattered the boundaries of funk, hip hop, and electronic and showed me that music is limitless. Cut Chemist is a LA legend and Jurassic 5 is one of my all time favorites.

DJ Shadow is amazing and one of the first artist to get me into this genre of rock, hip hop, and ambient beats music. Fixed Income and Organ Donor are by far two of my favorite songs to listen to while reflecting on life.

I’ve been listening to Endtroducing since ’96. I had a friend send me a copy since I was living in the middle of a rice field in Korea. It was at this time that I had picked up skateboarding as well. I don’t know how many times i’ve listened to this album, but most of it was while I skated, and the most played track was midnight in a perfect world (not the easiest thing in the world fitting a discman in the back pocket, but thank christ for skip protection!) Over the years, as cd players transitioned to mp3 players, I kept listening to Endtroducing and found that it kept me on pace and influenced the way I approached skateboarding, along with everything else in life, including my years with an aerosol can. To this day, midnight in a perfect world remains the most listened to track in my life, including this morning’s commute through downtown la. Endtroducing is also why I bought turntables and continue hunting through collections from Amoeba, all the way to tiny hispanic record stores on the east side. Life would have been viewed from a different perspective had that album never been produced. Thank you Shadow, you saved my life.

the eels electro shock blues was a whole album that touched me very deeply. it dealt with the death of a parent and mental health and suicide and cancer, and starts off very bleak but over the course of the album it tells a story and ends on an uplifting note and this helped me and inspired me push through the same issues I was going through at the time, when an album comes across your way at the exact same time you need it

Thank you all for your touching stories. We have selected a winner! For those who didn’t win, we still hope to see you renegades of funk at this legendary event tomorrow night.