Yes, those Stone Roses. The same band that blew up at Reading back in 1996 and swore they would never get back together again… they lied. Which is good news for the rest of us! The original lineup – singer Ian Brown, guitarist John Squire, bassist Gary “Mani” Mounfield and drummer Alan “Reni” Wren – announced two gigs at Heaton Park in Manchester on June 29th and 30th, 2012. If you were curious if anybody still cared, 220,000 tickets sold in 68 minutes with the first two nights selling out in 14 minutes. The announced shows will be the first time the band has played together in 16 years.

According to the Roses, they also plan to record and perform new original tracks, and eventually head out on a world tour. Considering how vehemently they denied ever doing that in the past, we’re not going to hold our breath, but the prospect is exciting. Ian Brown, at the band’s press conference in London on Tuesday, hyped the reunion by stating: “This is a live resurrection that we’re inviting you to so you better be careful… Our plan’s to shake up the world.” Brown might be a little more confident in the band than we are, but you gotta love the bravado. If the boys can recreate any of the magic that made their 1989 self-titled debut album such a sensation, this could be one of the biggest reunions in years. We’re keeping our fingers crossed. 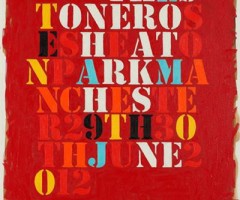 ~ The Stone Roses announce two already-sold-out shows at Heaton Park in Manchester, June 29th and 30th… plus a bonus show just for kicks (and by popular demand).