Groove Cruise LA – touted as the world’s largest floating dance music festival – disembarked from Long Beach Harbor on Friday, September 27. The Carnival Cruise Ship “Inspiration”, packed with some of the biggest EDM artists in the world and 2,000 of their fans, took this party where I never thought it could go – mobile AND international. It wasn’t a series of shows over a three day weekend, it was ONE CONTINUOUS PARTY. So how was it? Well, surreal doesn’t exactly cut it. It just simply wasn’t real. It couldn’t be. I mean, how could that many people have that much fun for so long! Nine stages, five theme parties, pool parties, Mexican club shows, a beautiful island beach party, lots of new friends and your favorite artists.

This festival is a floating microcosm of everything that’s exceptional about the dance music scene. The first theme party “Represent” made it was readily apparent from the outset that this was an incredibly diverse group. Everybody dressed up to show off their state, their country, their music group, their company, their online music community (ahem, Rabbits Black), or whatever else they identified with. Roaming groups of kids in Detroit T-Shirts, Brazilian flags, Miami tanks, or even bear suits. [display_quote align=right]“I’d say it was definitely an ultimate escape from reality. It was amazing to be in a completely judgment free environment. The feeling of connectedness with total strangers was my favorite!” – Megan, 28, San Francisco[/display_quote]There were kids in their early twenties, young professionals, forty-somethings, and couples in their fifties . There were ravers, doctors, lawyers, musicians, accountants, producers, promoters, dancers, cruise-ship members – all commingling. It didn’t matter where you came from, it just mattered that you were there. That’s what everybody had in common.

There was a moment – a brief, fleeting moment – when reality intruded on this fantasy. In retrospect, it was one of the most entertaining parts of the entire weekend. When the boat anchored off of Catalina Island for the first of two land-party excursions, the passengers had to take ferries to the docks, then walk along the shore to get to Descanso Beach Club where Chuckie and the Dirty Dutch were playing a beach party set. This island, naturally, was full of tourists and families who had decided to spend the weekend visiting the island. The ten minute walk that ensued was an absolute show. Hundreds of cruise passengers – dressed up (or down, as you can imagine) as cowboys and Indians, ravers and dancers, aliens and furry creatures – descended into a very unsuspecting city. There were a lot of strange looks, a lot of smirks, a few parents keeping their children a little closer to them, and even a few wives and girlfriends wondering what their significant others were staring at…and then finding out. When you realize that this “scene” never seemed that odd or unusual on the boat, and the concept of “judging” how people dressed or behaved  had never crossed your mind, you begin to appreciate how special the cruise really is. 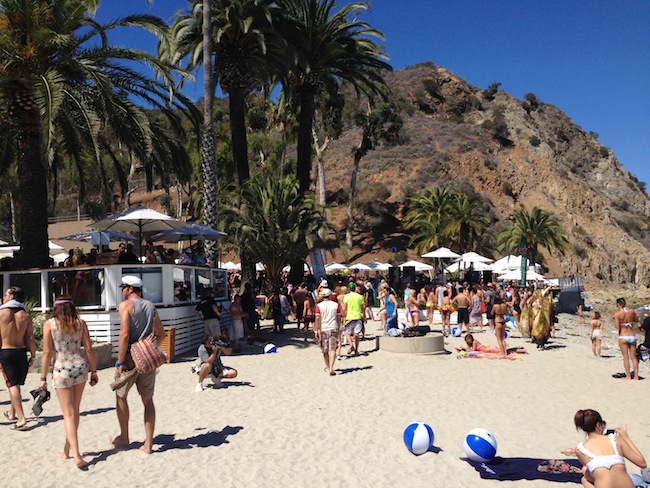 Descanso Beach Club in Catalina was the site of a private party on-shore for Groove Cruisers.

Then there’s the music. It is the catalyst, and it doesn’t stop. Well, what mood are you in? Do you love the big venue? Hit the main Paris auditorium for the Markus Schulz set on Friday night. It’s Markus…he’s playing until the sun comes up. Get there early and Jochen Miller and Kristina Sky will make sure you’re ready to go all night. Do you want a raucous pool party? Well, the EC Twins had you covered all weekend (seriously, those guys were everywhere!). [display_quote align=right]“I keep telling people it was simply one of the most life affirming experiences I have ever had.” – Andy, 35, Los Angeles[/display_quote]Do you want another raucous pool party? Of course you do. Markus’ surprise pool party set on Sunday likely removed the phrase “don’t rock the boat” from the English language. It was so special that a couple of cruisers decided to get married DURING the set. Do you want to party outside on the beach? Hit the Dirty Dutch set at Descanso Beach Club on Catalina Island on Saturday afternoon. You want to mellow it out a bit? Hit the rear deck for a sunrise set on Sunday morning, or the pool area for the Anonymous sunrise set on Monday morning. Whatever you can handle, this boat can provide.

That was the Groove Cruise. Our first, but definitely not our last. The best part: judgment-free. Be yourself, or be somebody completely different – it’s your call. I mean, we’re all in this together.

Its impossible to give each artist a full review because it was 24-hours of music all day every day and this isn’t the place to test out the “internet has unlimited space” theory. Suffice to say that there were too many amazing sets to count. But don’t worry, we have the highlights for you! Our staff has put together our awards page for the first ever Groove Cruise LA so you can feel like you were there too. And if you couldn’t make it to this year’s Groove Cruise LA, don’t worry, Groove Cruise Miami is right around the corner in January.

Continue to the next page for our best of selections!