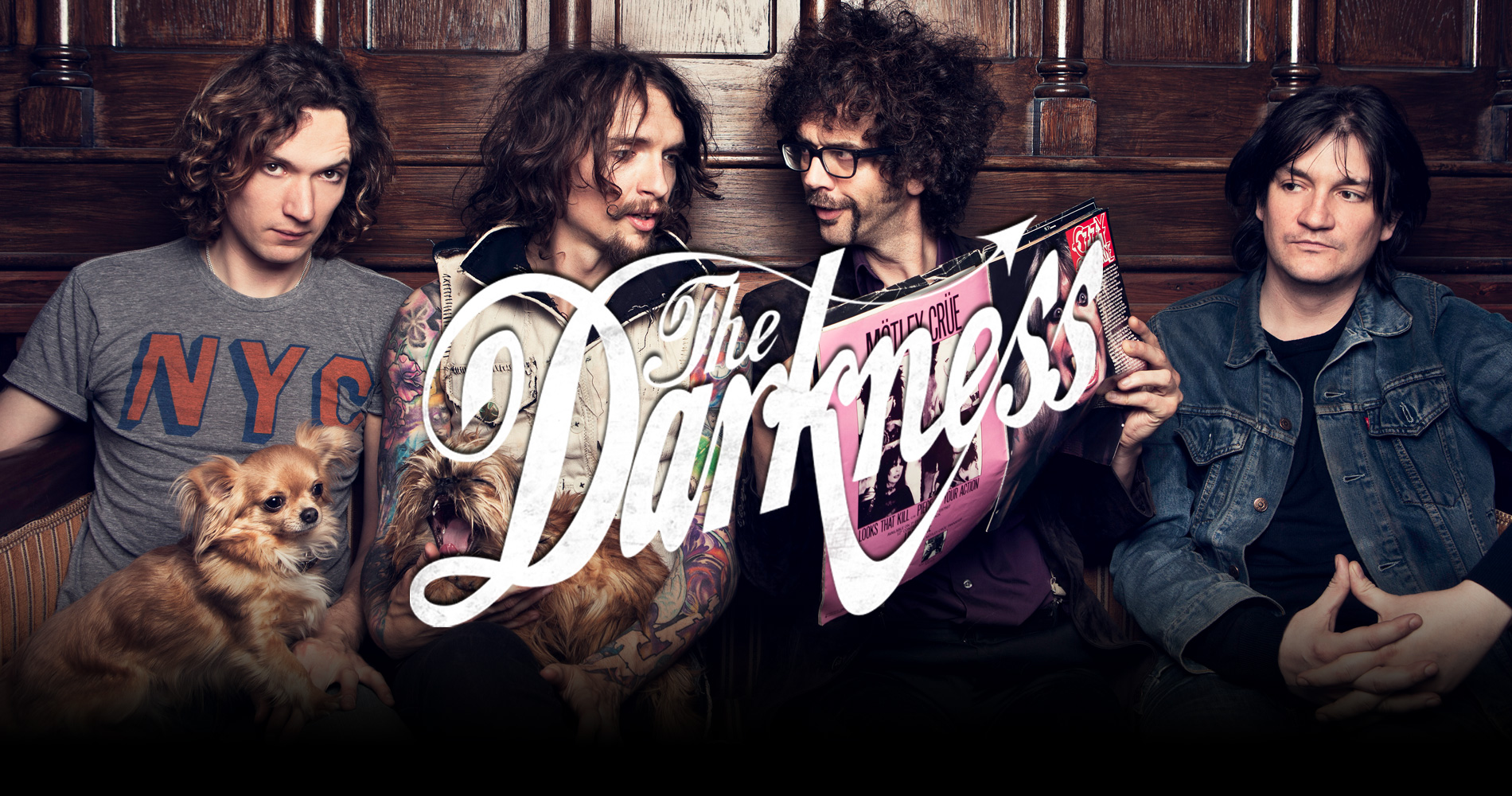 The Darkness return to Los Angeles with a clever nod to the Beatles, naming their recent tour Back to the USSA 2016. The epic British rockers will have their face melting guitar licks and glass shattering falsetto on display April 12 at The Belasco Theater in downtown Los Angeles. Best Read more… 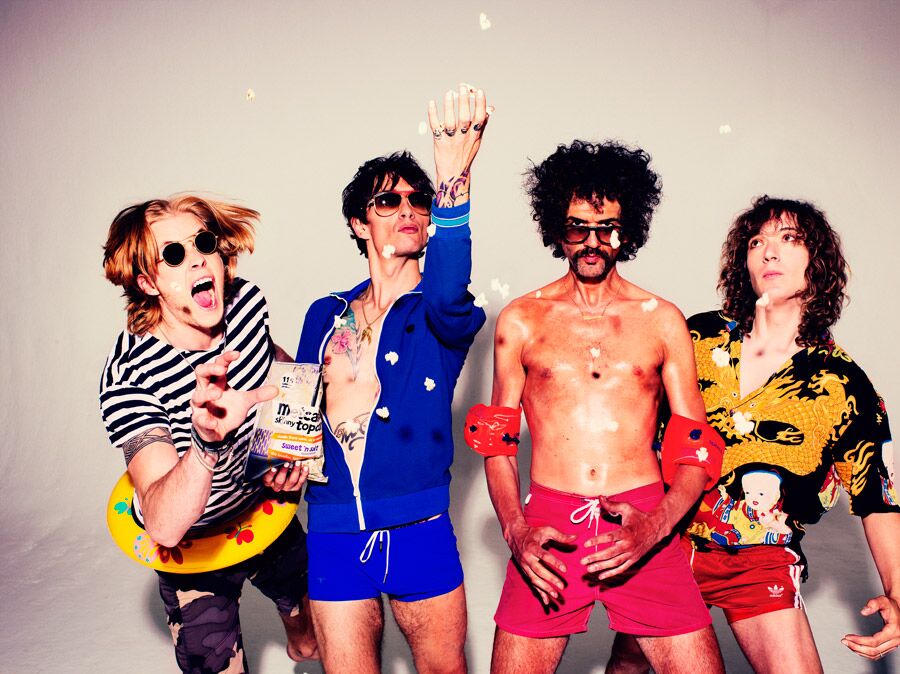 It’s not too late to score tickets to see The Darkness at Pomona on Friday, October 9th. Made up of brothers Justin and Dan Hawkins, Frankie Poullain, and Rufus Tiger Taylor, the Darkness stole our hearts back in 2003 with the rapturous track, “I Believe In A Thing Called Love” before embarking on a hedonistic Read more… 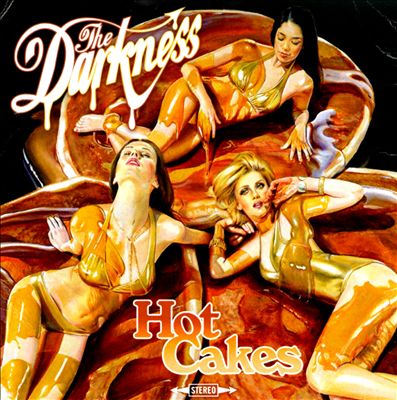 The Darkness are following up their recent LA shows with the debut of their new album Hot Cakes which was released everywhere in the U.S. today, 8/21, on Wind-Up Records. This is The Darkness’ third Studio album and the first since 2005’s Permission to Land. The newest singles have the same guitar shredding, falsetto wailing, and theatrics that made their first two albums so much fun! And probably most surprising is that Justin Hawkins was able to bring together all of the original band members (Justin Hawkins, Dan Hawkins, Ed Graham, and Frankie Piullain), a feat that looked impossible after the band’s non-mutual breakup in 2006. But as J. Hawkins says in “Knockers” off Permission to Land: “The old magic is still there!”  Check out their newest video below and information on their listening parties this evening 8/21 at Amoeba Hollywood @ 5pm and Amoeba San Francisco @ 6pm, and let us know what you think! END_OF_DOCUMENT_TOKEN_TO_BE_REPLACED 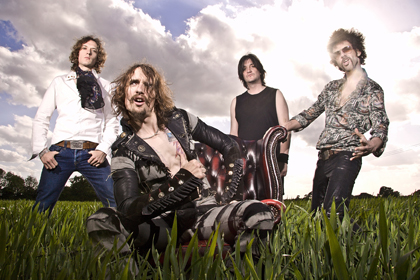 Yes, everybody’s favorite modern glam rockers are winding up their U.S. tour! ONLY 3 DATES LEFT! Stubb’s in Austin tonight, ROCKLAHOMA tomorrow in Pryor, OK, and the House of Blues Sunday in Dallas, TX. Of course, RABBITS BLACK with will be there for their last US date at the House of Blues in Dallas to give these UK boys a proper send off.  So for any of you huge The Darkness fans out there (myself included – I once flew to London for one night to see them at Alexandra Palace in 2006), or music fans that just happen to find yourself in the Lone Star State this weekend, don’t miss out on your last chance (maybe ever, knowing these guys) to believe in a little thing called Rock and Roll (and party with us).  END_OF_DOCUMENT_TOKEN_TO_BE_REPLACED 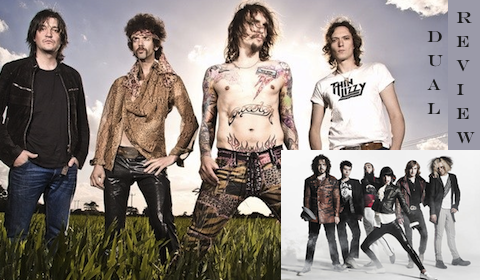 The Rabbits Black staff can’t get enough of The Darkness and Foxy Shazam!  The Darkness on their return to rock tour with the party-starting Foxy opening?!  Ya, count us in for two nights!  So we just had to check out both shows so Rabbits Black could be in the building for the House of Blues Sunset show in Los Angeles and the Fillmore show in San Francisco.  We sent a dude to LA, and a chick to SF.  Get the dual perspective on these two shows in two cities from two different sets of eyes and ears.  The dual feature review is here! END_OF_DOCUMENT_TOKEN_TO_BE_REPLACED

I believe in a thing called The Darkness! Welcome back. The English rockers brought their guitar wailing and falsetto to a very sold out crowd at the House of Blues on Sunset last night (Sunday). After a 5 year hiatus Justin Hawkins reunited with his brother Dan Hawkins and the rest of the original band members (Frankie Poullain (bass) and Ed Graham (drums)) and put on a show almost too big for the HOB. Several wardrobe changes, 1 trip around the main floor on a roadie’s shoulders, a new mustached look, and 2 hours full of old hits and new material left a breathless crowd spilling out onto Sunset Blvd. on a Sunday night in Hollywood. END_OF_DOCUMENT_TOKEN_TO_BE_REPLACED 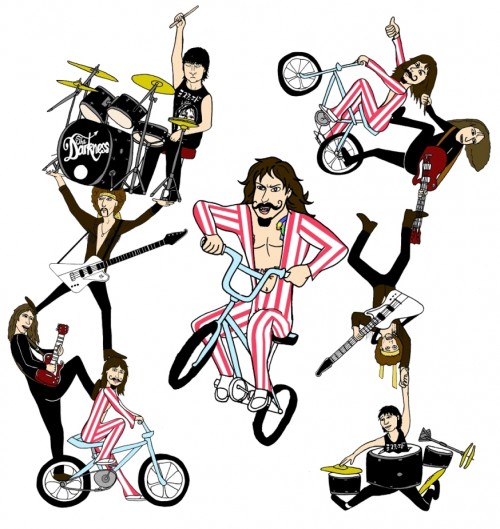 The Darkness have released the first single “Nothin’s Gonna Stop Us” off their long awaited reunion album. This is officially the first new material the band has released since 2006. You can watch the video and download their new song FREE on their website!  The Darkness returns all original members: Justin Hawkins (vocals/guitars), Dan Hawkins (guitars/backing vocals), Frankie Poullain (bass) and Ed Graham (drums). The Darkness are currently in the midst of their North American Tour and will be coming to LA @ HOB Sunset 2/19 and the legendary Fillmore in SF 2/21. END_OF_DOCUMENT_TOKEN_TO_BE_REPLACED 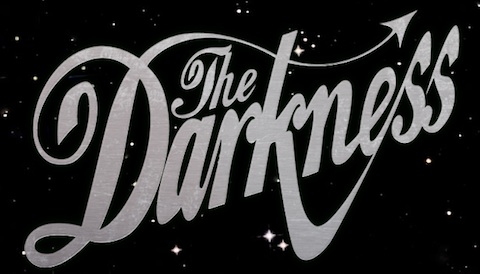 “Darklings of the new world… we’re coming to get you!” The Darkness have announced North American tour dates for their reunion tour and they will be coming to California in February. They will play the House of Blues in Hollywood 2/19 and the legendary Fillmore in San Francisco 2/21. After exploding into rock stardon with their 2003 debut Permission to Land (featuring “I Believe in a Thing Called Love”), The Darkness quickly gained notoriety for their classic rock influences, guitar riffs, and elaborate stage performances. The band began to fall apart after the release of their second album, 2005’s One Way Ticket to Hell … And Back (which is an underappreciated record), and Frontman Justin Hawkins left the band in 2006. The Darkness has not played in North American since, and here is your chance to see them in two amazing venues! Ticket information and more after the jump. END_OF_DOCUMENT_TOKEN_TO_BE_REPLACED