The Sunset Strip Music Festival (SSMF) took over West Hollywood and reminded the crowd just what a rock concert should be. The sixth annual festival partnered with Music for Relief, a nonprofit organization that festival headliner Linkin Park founded, with a significant amount of ticket sales being donated to help survivors of natural disasters.

SSMF kicked off its three-day party Thursday night with a performance by Joan Jett & the Blackhearts at the House of Blues. Friday night former Stone Temple Pilots singer Scott Weiland performed a far-less than impressive set at the Viper Room filled with botched up lyrics and pathetic attempts to play STP oldies.

But all was well and forgotten once Saturday evening came around and the real party began. With the entire strip shut down, a street where usually traffic would be found on a weekday morning drive instead held food trucks, alcohol and a plethora of free goodies.  While the free Hubert’s Lemonade and Jack Daniel’s backpacks were a great gesture, going through the crowd to get them was not as enjoyable.

Headliners Linkin Park managed to live up to the hype performing an hour and a half set with classics like “Numb” to their newest hits “BURN IT DOWN” to even an unreleased rap verse by band member Mike Shinoda. The band kept the crowd pumped as they relived the days where they played down the street at the Roxy.

“Our dream was to play at Billboard Live…little did we know the dream would end up for us to play in front of Billboard Live [on the strip],” Shinoda said to the roaring crowd.

Awolnation also held their own on the West stage as lead singer Aaron Bruno jumped and screamed the lyrics to hits “Sail” and “Not Your Fault.” On the East Stage rap duo Slick Rick & Doug E. Fresh had the crowd bumping and jamming to everything from the “Fat Albert” theme song to the Jackson 5’s “A,B,C.” 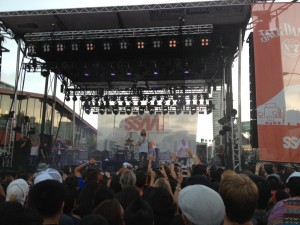 Asher Roth fell through the cracks and while he tried to break out of his one hit wonder “I Love College” reputation, his rapping best resembled something to be heard at a fraternity open mic night or in a beginning scene of “8 Mile” before Eminem becomes talented.

Overall, the festival went smoothly and lived up to its expectations. While there was some speculation as to whether or not it would continue to grow, the Sunset Strip Music Festival proved to skeptics and fans that it is not going anywhere, something any music fan should be happy about. 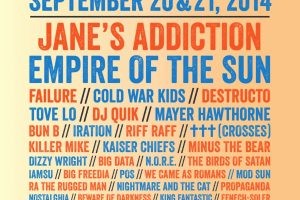 This Weekend SSMF ’14 Takes Over the Iconic Sunset Strip

As fellow RB writer Steph wrote in her Riot Fest[...]