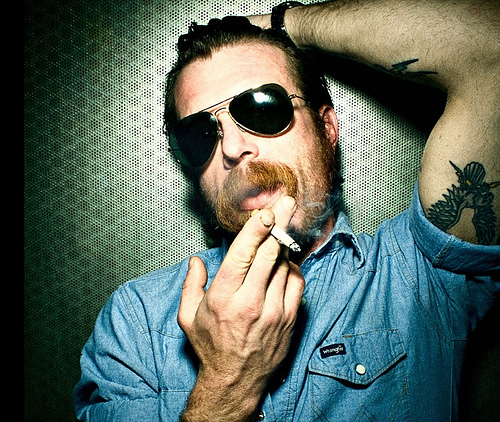 Boots Electric brought his exciting brand of rock and roll to the Roxy last night! Let’s rock, can you dig it?! Jesse “the Devil” Hughes, aka Boots Electric, and of Eagles of Death Metal fame, brought his new band and dance heavy sound to entertain the Sunset strip crowd that donned devil horns and fake mustaches and got their week started off right.

The show combined the hits from Boots’ debut album such as a solo version (sans Brody Dalle) of the Boots Electric Theme along with Eagles of Death Metal classics. Not expecting a ton of EODM material, the pleasantly surprised crowd sang along and danced to “Whorehoppin (Shit Goddamn)” and “I Only Want You”, and got really into an obvious Hollywood favorite “I Really Wanna Be in LA” … that is of course until Jesse forgot the lyrics. The Devil was as enigmatic as ever and, the consummate entertainer that he is, gave just as much with his dialogue in between songs to get the crowd riled up as he did during the songs themselves.

The set picked up midway through as a fight broke out on the side of the stage and more EODM material took over. The set culminated with Hughes smashing his malfunctioning guitar and exclaiming “I will break everything in my path to make sure we get to breakdown!” And the crowd made sure they helped with the breakdown. For those looking for a great Monday night show, this was the place to be.

And hell, this is Movember right? What better time to see Jesse Hughes and one of the best mustaches in this business.