Hey folk fans! The Milk Carton Kids will be back home in Southern California, in the middle of their tour with KD Lang, for a special show at Zoey’s in Ventura on Friday, June 22. The two-piece, made up of Joey Ryan and Kenneth Pattengale, brings a harmonious indie-folk that is sure to soothe your summertime blues. Last January The Kids recorded an intimate live album Retrospect at Zoey’s, and they are back headlining the venue for another special, intimate performance. It should be a unique experience to listen to the tracks from Retrospect in the same acoustic setting in which they were recorded. Read more after the jump.

The ever-funny, and lyrically honest Kids are truly an up-and-coming force to be reckoned with, and have been featured on NPR, KCRW, and more in the last year alone. The simplicity of their acoustic sound, and the honesty of their lyrics, is at times warmly comforting and at others deeply heartbreaking. And, actually, their stage banter is pretty hilarious and makes for an enjoyable show for even those not as familiar with their music.

The duo has two albums out, Retrospect and a studio album Prologue, both of which are up on their website for FREE download. Give ‘em a listen and catch their show Friday June 22 at Zoey’s in Ventura. 7:00 doors, 8:00 show, tickets are $25. Listen to their song “Michigan,” and check out a video of “Permanent” from the sound check for their show at Zoey’s last year, below. 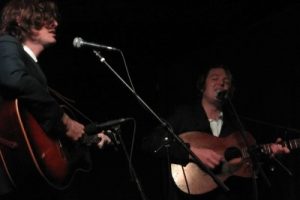 Guest Review by Sofia The Milk Carton Kids bring us[...]