Since the Fox Theater in Oakland CA reopened its remodeled front doors back in January of 2009 with a Social Distortion headlining show, there has been an array of incredibly awesome performances each and every concert season- Queens of the Stone Age, on this night in April, might have been the best concert at the Fox in Oakland yet. From the Eastern influenced theatric themed walls, décor, and stage curtain to the extremely clutch GA floor bar with cocktail waitress service, this is one of those venues where music fans unite for acts they have never heard before, just to be a part of a novel fanatic vibe and atmosphere.

Put this setting together with arguably one of the sexiest heavy riff rock bands of the last 25 years, and you are guaranteed a proper, epic, and fucking awesomely RAW rock-n-roll experience.

The wait has been grueling for Queens of the Stone Age to re-release their self-titled album that made its debut in 1998. Hard copy CDs (no longer sold in stores until the re-release) were selling for around $100.00 on EBAY a few years back and I hid my credit card in order to save those funds for this mythic tour… and, after listening to the QOTSA album for years and literally having nightmares about never seeing it live, it finally came to the Bay Area on a Monday night (of all nights), April 11, 2011.

As the crowd filled every corner of the Fox, refilled their drinks, and made sure they still had their lighters, the QOTSA set began with track one of the 1998 album QOTSA, “Regular John.” I, crowded into the stage left side of the GA Floor (right next to the bar), took a second to look around the dynamics of the fans in attendance. To no surprise, there was a solid mix of older and younger people rocking out and singing along.  I decided at that time to shut off all electronic devices and join in the festivities. Beer in hand, I danced, head banged, and sang along as QOTSA played through the well awaited entirely of their epic first album, start to finish. There was even a sweet B Side track thrown in the middle of the journey in “`The Bronze.”  Once the album was finished and the crowd satiated in the greatness that is QOTSA live, Josh Homme and the others started to exit the stage to a momentous ovation. It seriously sounded like the band had just announced that they bought out the bar and planned on taking crowd requests for the rest of the evening… which was not that far from the truth.

They made their way back onto the stage with a slightly adjusted production prop, ice-sickle like fluorescent light tubes dangling from the ceiling and lowered down to the band’s eye level.  Though the drinks were still on us, the crowd was very much into the LSD influenced first encore trip-track, “Monster In The Parasol.” 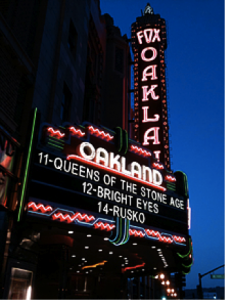 Now, for those of you that have never seen the lead front man of QOTSA perform, just check out this link, Josh Homme on Tosh.0. Nuf’ said. Josh Homme is a front man’s front man that always wants to party, make jokes, and just be cool (not to mention his wife, once upon a time Distillers lead singer Brodie Dale). In between cigarette puffs and bottle swigs on stage during the encore, Josh found time to address the crowd, “I just want to make everyone dance and f$ck and hang out…. I don’t really care if you drink or get high or you’re sober, none of that matters…and in some ways, I just want to make it with all of you.”  This statement came just before the third song of the FIRST encore (yeah, there may have been more than one), “Make IT Wit Chu “off of their 2007 release Era Vulgaris. Once through the fourth song, “Little Sister,” I thought for sure the show was finished, but wait, I seemed to remember the heuristic that a Queens show cannot end until the closer, “A Song for the Dead” (Songs For The Deaf, 2002). Were they going to break the cardinal rule?

The band once again exited the stage to even louder cheers than before. Now, not only were they going to buy the bar and take crowd requests, but Nine Inch Nails just announced a come back tour and album. It was that loud. Just before my eardrums popped, Josh and the rest of the gang returned to the stage for a SECOND ENCORE! I have been to many shows large and small and have never witnessed this phenomenon. It truly made me feel like QOTSA were playing for nobody else but US…Bay Area Californians, and genuinely loved every minute of it.  One of my favorite Queens stoner rock tracks of all time is “Better Living Through Chemistry” (Rated: R , 2000), and when that beginning Queens style guitar melody and siiiick base line dropped, I just had to light up.  The 6+ minute long multi-plex riff and solo question and answer session ended with botched crowd surfs and bellowing smoke clouds in the air (see link, Better Living Through Chemistry 4-11-2011). Turns out, QOTSA were not going to break the closer rule after all, and, after a pulsating performance of “Go With The Flow” (Songs For The Deaf, 2002), the unmistakable start to “A Song for the Dead” vibrated through the speakers.

The 2+ hour set finally came to a close. My feet hurt, my ears rung, my voice was gone, and a stone cold smile was frozen on my face… I knew what I had just witnessed, and so did the rest of the 3000+ in attendance. We were just a part of a little piece of modern rock history in an awesome venue with a premier heavy riff rock band in Queens Of The Stone Age… I am not sure any more cowbell would have done any good…