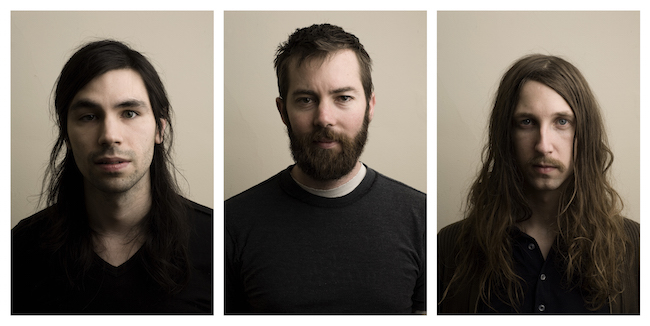 Russian Circles, the three piece instrumental metal band from Chicago, has been celebrating ten years on the road this past year and leading into 2015.  That tour doesn’t end until a stop at The Roxy in West Hollywood on January 24th.  The band creates an enveloping atmosphere during their live performances that takes the listener on a journey.  If you have enjoyed their five studio albums, and the latest Memorial from 2013, you owe it to yourself to see Russian Circles perform live.  After this show, your next and only chance on the west coast will be at Psycho California in May.  Here’s your chance to get into The Roxy show on us and at one of LA’s more intimate venues.  It’s our Show of the Month and we’ll be giving away tickets starting next week.  Enter here!

You can increase your chances of winning by leaving a comment on this page in the comments section below and also by emailing us at Tickets@RabbitsBlack.com with “Russian Circles” in the subject line. Please included your Facebook username in the e-mail so we can validate your entry. Tell us why you want to go to the show!

You DO NOT have to enter through each entry point. You must Like Rabbits Black on Facebook in order to claim your prize. Using more than one entry point will increase your chances of winning. Winners will receive a pair of tickets to the show. The winners will be announced on January 22nd on the Rabbits Black Facebook account.

You can still get tickets to the show at the link below.  Russian Circles will be playing Psycho California, the west coast’s largest gathering of doom and metal, this May.  Stay tuned at www.PsychoCA.com for more information on that performance.

Haven’t caught them yet, but would love the opportunity!

Help this fan get into the show!