While you probably know that Red Bull gives you wings, you may not be aware that the energy drink brand also knows great music and is hosting a series of special shows this summer across Los Angeles, entitled “This City Belongs To Me”. LA DJ/producer TOKiMONSTA is set to headline the second night of Red Bull Music Academy’s four-part concert series taking place next week Saturday, July 26th at a secret location downtown. 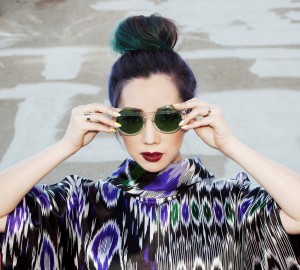 TOKiMONSTA (nee Jennifer Lee) got her start in music playing classical piano, but she began creating beats with an SP-404 sampler and Fruityloops software in her teens. By college a growing love affair with hip hop informed her sound as she began frequenting Beat Cipher’s open mic nights. Taking on the name TOKiMONSTA (a portmanteau of “toki”, the Korean word for rabbit, and a play on “monster”), it wasn’t long before Lee’s rich soundscapes, complex atmospherics and, of course, monstrous beats caught the attention of Flying Lotus.

After the 2009 release of her debut EP, Cosmic Intoxication, on London’s Ramp Recording and follow up Japanese imprint Midnight Menu on Listen Up, FlyLo invited Lee to his label, Brainfeeder, where she released her debut LP, the celebrated Creature Dreams. Having been compared to acts such as Daedelus, Star Slinger, Shlomo and Grimes, Lee is now working on her third full-length album, which she will release on her own label.

“This City Belongs To Me” is a four-part series of concerts curated by Red Bull Music Academy that kicked off last month with a special DJ Harvey show. Part three will go down September 6th as record label Friends of Friends celebrates their five year anniversary with a special show pulling deep into their catalog and featuring sets by Salva, Groudislava, Daedelus, Jerome LOL, and of course some surprise guests. Rhonda International will host the final event on October 24th.

RSVP at redbull.com/thiscityla for free entry to next week’s (and all of the RDMA) events.