Need a little something to get you over this hump day? Does the LA Party never stop for you? Whether you need a pick me up or keep me going, The Troubadour is where you need to be tonight! LA’s very own Robert DeLong will be headlining the Troubadour on July 11 as part of KROQ’s Locals Only series.

Newly signed to Glassnote Records, Robert DeLong has been steadily increasing his reach and skill as a musician. Have you ever heard a song so catchy that as soon as it ends, you want to hit “repeat” immediately? “Enough” by SONOIO was that song for me last year. This year, it’s Robert DeLong. Not just one song, but every song. Robert has a knack for crafting catchy songs that will have you singing along on your first listen.

I first discovered Robert by catching him during his residency at The Constellation Room at the Galaxy in Santa Ana. By the end of “Basically, I”, and to my amazement, I was already singing along – “does this change how you feel…about everything?” Not only does Robert write catchy loops with mesmerizing beats, he performs the entire song. Live. Alone… by looping his drumming, vocals, and beats over and over. To boot, Robert uses joysticks, Wii remotes, and other fun gadgets in his live performance instead of effect pedals.

Robert has an ability to capture the attention of every person in a room. He has steadily grown in popularity this year, dominating fan-backed KROQ contests, appearing at South by Southwest, the Silver Lake Jubilee, and the Starscape Festival in Baltimore, Maryland, and landing residencies at The Constellation Room and Los Globos. In addition to scoring a commercial for Nike, Glassnote Records took note of Robert’s immense talent and signed him to their strong roster at the beginning of this month.

Snapshot – “Happy (Radio Edit)” by Robert DeLong dominated KROQ fan polls, and with good reason. Be sure to check out Robert DeLong TONIGHT at the Troubadour. Click the flyer for more information on the show. 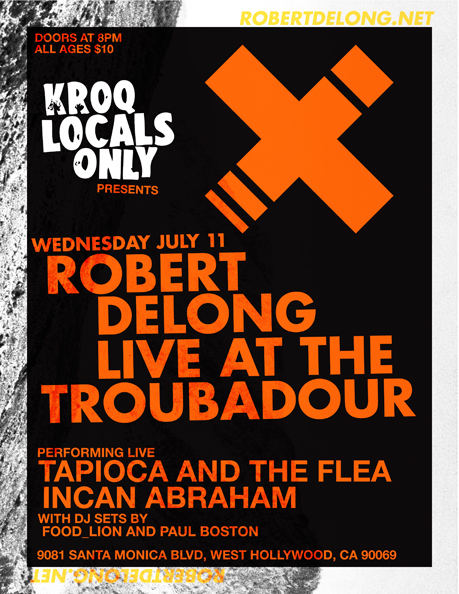 KROQ Locals Only presents Robert DeLong at The Troubadour