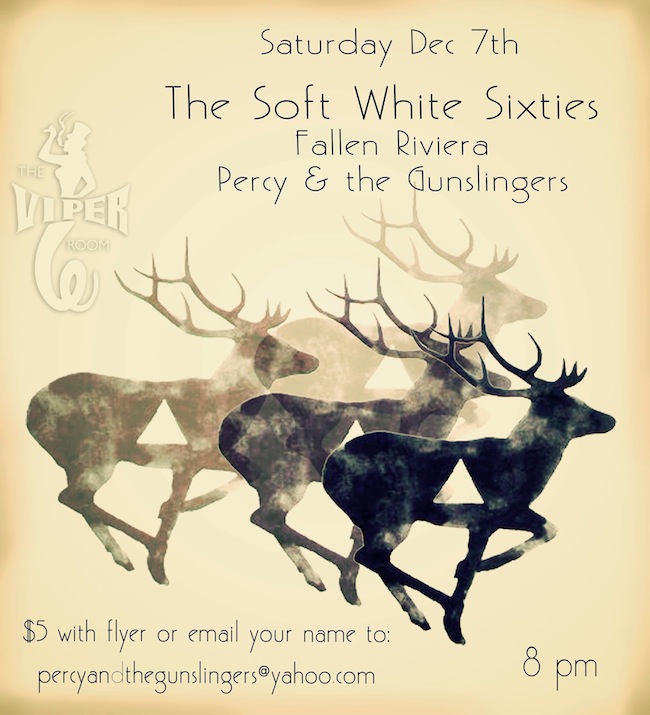 Percy & The Gunslingers have been getting around town in 2013.  The band formed in Los Angeles earlier this year around the melodies of singer and songwriter Ali Mills.  While the lead vocalist might give the band it’s Stevie Nicks’ sound, the rest of the five piece including Eric David, Frankie Pedano, Timmy Sean and Alex Schneiderman give it the soul.  Percy & The Gunslingers have been seen around town on the Westisde at O’Brien’s on Main St. in Santa Monica all the way to the Satellite in Silverlake.  Perfecting their sound and live performance has been an important aspect to the bands emergence onto the Los Angeles music scene this year.  Their debut EP was released this past July and featured the production work of one of our favorite Hollywood producers, Joseph Holiday of Loosefang Productions.  Holiday was the lead singer of Lady Sinatra, one of our favorite (and sadly gone) Sunset Strip thrash bands.

Percy & The Gunslingers are coming to the Viper Room for their second show at the legendary Sunset Strip location.  It’s already a packed December with amazing shows, but you’ll want to add this one to the calendar as well.  Check out some tunes below and print out the flyer above to get in at the door for only $5.  Stay up to date with everything about this show over on the event Facebook page.