You may not realize, but you’ve heard the electro-rock group Kinky before. Their tracks have appeared everywhere from the soundtracks of Man on Fire, Weeds and Dexter to the video games SSX3, FIFA 06 and Skeezy Golfer PGA Tour 08. Now the Latin Grammy nominees who have toured with the Flaming Lips, Cake, and Modest Mouse are bringing the dance party to the Conga Room at LA Live this Thursday, January 31st.

Kinky, comprised of Gilberto Cerezo, Ulises Lozano, Carlos Chairez, Omar Góngora, and Cesar Pliego, formed in Monterrey, Mexico back in 1998.  Playing a funky mix of electronica and alternative rock, the 5-piece group took the Latin Alternative Music Conference’s 2000 Battle of the Bands showcase in New York by storm, catching caught the attention of Brit producer Chris Allison, who has worked with Coldplay, Ned’s Atomic Dustbin, the Beta Band, and Fila Brizillia, among others. Allison produced Kinky’s eponymous debut album (which was licensed by Nettwerk America, the Canadien label known for releasing albums by Sarah McLaghlan and Barenaked Ladies) which ultimately wielded tracks reminiscent of the Chemical Brothers with a Latin twist.

Singing primarily in Spanish, Kinky nonetheless defies conceptions of what a Latin band sounds like. Their music is repeatedly heralded for standing “beyond the realm of geographic or demographic categorization, and most certainly beyond cultural expectations or stereotypes.” Their style changes rapidly, jumping from dance rock riffs to synthetic arpeggio to accordion, sometimes all within a single hip-shaking track.  You might recognize the hit single “Mas”, which appeared on the soundtracks for Thirteen and Man on Fire and 2002 Nissan Altima commercial spots.

Other stand outs include “A Donde Van Los Muertos” (“Where the Dead Go”, for you Anglos) and Sister Twisted.

Still hot off their 2011 album, “Sueño De La Maquina” (“Dream of the Machine”), which garnered Kinky two Latin Grammy nominations, the now L.A.-based quintet is gearing up for a KCRW-sponsored show at LA Live’s Conga Room this Thursday, January 31st. Bring your dancing shoes, cuz this show will be a live one! 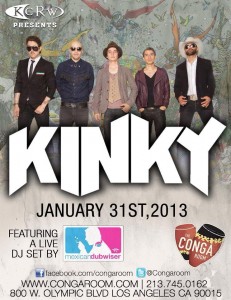 Music and concerts are way better with friends! Suggest this concert to friends who like Mexican Institute of Sound, Chemical Brothers, Daft Punk, and Manu Chao. 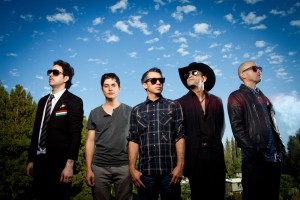 Here’s a First Friday show to rule them all: Mexican supergroup Kinky will[...]