Infantree come to Bottom of the Hill May 11.

Southern California’s latest contribution to the indie-folk scene is coming back to San Francisco! In preparation of the release of their sophomore album Heroe’s Dose, Infantree will play Bottom of the Hill TOMORROW NIGHT. Rabbits Black has an exclusive download of the young foursome’s latest single, “Fibber”.

Now signed to Neil Young’s label, Infantree are teeing up with promises to be a big year for the band. The quartet has already ticked Bonnaroo, Wakarusa, and Neil Young’s Bridge School Benefit off their bucket list. With dates lined up at Austing City Limits, Summerfest, and San Francisco’s Outside Lands, expect to hear this band’s name buzzing around. Their sophomore album Hero’s Dose comes out on June 26th, and the band will perform live on Conan to support its release on June 28th.

Until then, you can get your fill of Infantree by checking them out at one of San Francisco’s best and most intimate clubs, Bottom of the Hill, on Friday, May 11!

If “Fibber”, the band’s latest single, is any indication, Hero’s Dose will set a new and mature brooding and hypnotic tone for the band. Download “Fibber” now and it won’t stop repeating on your media player! 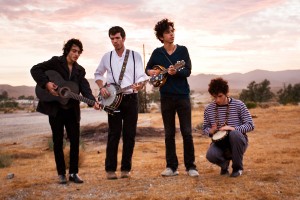 Infantree. The name has been buzzing around town since the[...]