Special preview by Bryce. Is rock ‘n’ roll really dead? Depends on whom you ask, but John McCauley and the boys that form Deer Tick are doing their best to prove it’s still alive and going strong.  The rockers from Rhode Island are coming back to Vancouver later this month (they were here back in November).  The group will again be touring on the backs of their Divine Providence album – an album made to sound like their live shows: rockin’ fast and full of noise.  Their early stuff contained some folksier or country elements, but their latest record was a step in a slightly different more punk-ish, heavier direction.

Even if you saw them last time they were out, they’ll be jumping from The Rickshaw Theatre to The Commodore this time. Moving to one of Vancouver’s top, smaller venues should only further enhance a band that can count part of its success to their exuberant live shows.  All we have to worry about now is that given the decadence and debauchery evoked from this album, let’s hope they survive playing Sasquatch two days earlier.

The show is Wednesday, May 30. Tickets are $20 and already available through Zulu records, Red Cat, Highlife or Ticketmaster. 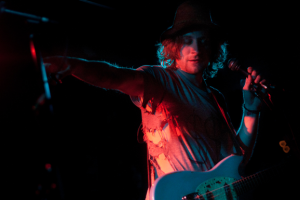 A late change of venue couldn’t slow down the boys[...]