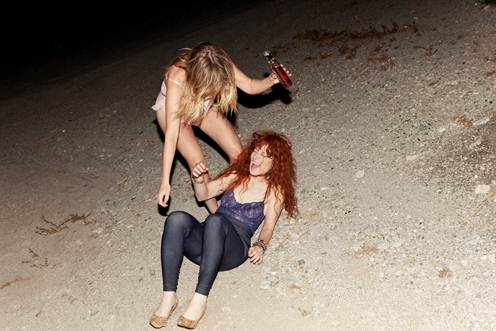 Rabbits Black has had several Deap Vally posts recently and we want to avoid any appearance of bias without backing it up with facts (although we definitely have some bias in certain cases … cough… NIN) so I think its worth taking a minute to understand why we’re so enthralled by this as-of-recently unknown rock duo. There are several compelling factors, but ultimately you’ll have to decide for yourself: 1) They have recently landed spots at major festivals like Outside Lands and Lollapalooza and their performances have been met with great reviews; 2) In the last two months they have been announced as openers for epic bands — and RB Favorites — Queens of the Stone Age and Black Rebel Motorcycle Club;  3) Their music is raw, dirty, sexy, blues-rock that if genders were reversed would make you want to throw your bra onstage; 4) We’re still not sure if they are good girls or bad girls, but they do make bad-ass music and guessing is half the fun; 5) They are from beautiful sunny Los Angeles; 6) They have done all this before ever releasing a single full album (Their debut album Sistrionix comes out in North America on October 8.)

But hell they are brand new, so give them a listen for yourself and let us know what you think! You can listen their newest single (and a few “old” ones) and get ticket info for their upcoming tour below.

Check out their tour schedule to find a show near you and buy tickets. For all the LA fans, DV will perform Thursday 9/19 at the Glasshouse in Pomona.

Deap Vally – “End of the World”