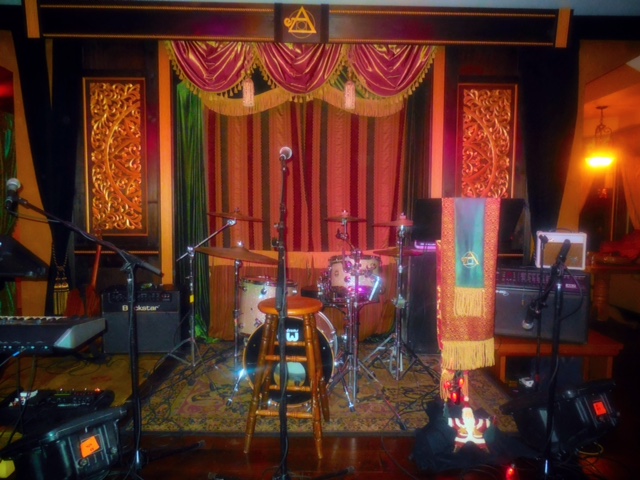 ‘Twas a night of true good old fashion rock n roll in the Hollywood Hills this past Saturday night. Legendary Vicky Hamilton, best known for managing the early careers of one of Sunset Strip’s – and the world’s – most iconic bands, Guns N’ Roses, just finalized her long awaited memoir, “Appetite for Dysfunction” which is set to be released in early 2015. Celebrating the pre-launch of her intimate autobiography, Hamilton graciously hosted the “Season’s Reading” holiday Soiree Dec.13 in a grandiose “castle” high above the Hollywood Hills.

Vicky Hamilton essentially spent her epic career behind the scenes by managing famous rock bands such as Guns N’ Roses, Poison and Faster Pussycat and was a Management Consultant for Motley Crüe and Stryper. If a rock band needed to be booked, Hamilton was the go-to gal, for she was THE concert promoter and club booker throughout the 1980’s on the historic Sunset Strip. There isn’t anything this woman can’t do. To add to her many accomplishments she was also a journalist, playwright, screenwriter, and served as a Record Executive. Now, she can add the title “author” to her already impressive resume. Vicky is gearing up for the release of her tell-all autobiography, and on this night the spotlight is right on her. The book will give us direct insight into the life of a legend in the scene, sparing few if any of the details of her wondrous journey — her triumphs, hardships, magical experiences, and a glimpse of her days with some the most legendary rock bands in history.

The “Seasons Readings” event, packed to full capacity at a secret “castle” location atop the Hollywood Hills, was filled with VIPS, musicians, journalists and industry insiders. Everyone in attendance had their eyes and ears glued to the beautifully talented Miss Vicky Hamilton as she stood proudly on stage while she read various excerpts from her upcoming book.

Here is a little sneak peak: Expect the scoop on some of the most famous rock bands that ruled the Sunset Strip and then eventually the world, hilarious stories of Quaaludes, her days of actually sharing a tiny one bedroom shack with Guns N’ Roses, how the band came to be and what some people may not know, and her history with June Carter Cash. The book will also include chapters about her managing days with Motley Crüe and Poison and just how a small town girl from Fort Wayne Indiana set out to Hollywood and became one of the biggest rock managers of all time.

At the end of Vicky’s reading there wasn’t a dry eye in the house. Segments ranged from hilarious anecdotes and stories of the people she has met to the extremely emotional heart-felt and heart-wrenching stories of the struggles she has overcome. The room  erupted in applause after the reading.

The event was sponsored by MusiCares, a non-profit organization close to Vicky’s heart that provides a safety net of critical assistance for music people in time of need. While the night belonged to Vicky she did not come alone. The night’s entertainment included two other fellow writers that read excerpts from their upcoming publications. Writer/Poet/Actress Iris Berry, widely known for being one of the true and original progenitors of the L.A. punk scene, read excerpts of her book “Daughters of Bastards”. Musician/Author Jack Grisham also shared the microphone as he shared hysterical stories of his rock n roll days and also did a little reading from his book “’American Demons” for the crowd.

After the authors finished their readings it was time for the musicians to crank it up a notch, pump up the volume and rock out.  Up-and-Coming singer, songwriter and guitarist Diana Meyer took to the stage solo with her acoustic guitar and graced the crowd with  her vocals, lyrics and catchy tunes. Her unique style has an edge of punk rock and her tender ballad “Pink Sunglasses” is a must-add to your playlist. Later in the evening the crowd got a special treat when Jeff Cullen rocked out the house and made the ladies (myself included?) channel their inner groupies with his sultry and unique rendition of Aerosmith’s “What it Takes”. Dallon Weeks from Panic at the Disco

Christmas cheer was already in the air, but those in attendance were in for even more presents. There was a special guest appearance and performance by Dallon Weeks — singer, songwriter and bassist of Panic at the Disco — who performed his new Christmas track “Sickly Sweet Holiday”.

It was very merry night in Hollywood honoring and celebrating Vicky Hamilton. She is already a legend of the Sunset Strip and soon we will be able to share in her stories when “Appetite for Dysfunction” is released. Stay tuned for my in depth one-on-one with Vicky Hamilton. Miss Hamilton is pure awe inspiring Rock N Roll!

Please check out Vicky’s charity MusiCares which has touched so many lives.

You can learn more about Vicky Hamilton and hear more amazing stories from the glory days of the Sunset Strip on her video blog as well.