Festival season is NOT over yet! For those who missed Riot Fest in Toronto and Chicago, you can still catch the traveling tour in Denver this weekend. Get jet setting (seriously, f*** this LA heat) and see an incredible lineup of top notch punk rock talent.

It’s like Footloose brought to life – a small town killed the music after a local minister decided they must be free of punk rock’s evil influence. Forced out of the gorgeous farming town it once called it’s Colorado home, Riot Fest relocated to the city of Denver, displacing festival goers who had relied on camping in the country to make the festival financially feasible. Still the show must go on. Now taking place at the Sports Authority Field surrounding Denver’s Mile High Stadium, Riot Fest proves that rock and roll can never die.

From classic acts such as the Cure, the Violent Femmes, Slayer, and Wu-Tang Clan to punk legends The Descendents, Bouncing Souls, Buzzcocks, NOFX, Dropkick Murphys; emo heavy hitters Glassjaw, The Used, Taking Back Sunday, New Found Glory, ska greats Me First and the Gimme Gimmes, and a whole slew of weird with Primus, The Flaming Lips, and TV On The Radio. And these are just the bands you likely know. This isn’t your modern electro-washed festival, so bust out your shit kicking boots* and safety pins, and leave the hippie trappings and day-glo body paint at home.

I’m not done shelling info about Riot Fest yet, so come back tomorrow to learn about some smaller acts you’ll want to check out this weekend in Denver. 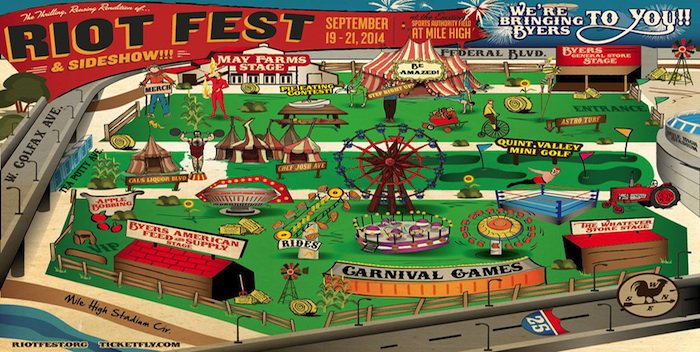