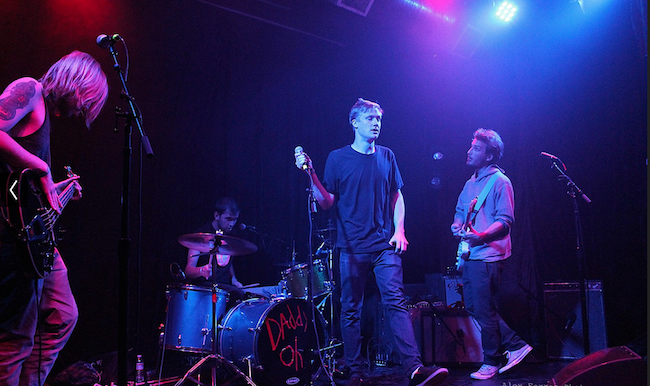 For your listening consideration, may we present to you San Francisco rock band WAG.  The members of WAG just barely hit their 21st birthdays when they played live shows in Los Angeles and San Francisco this past May, but they already sound like a band with more than a few years under their belt.  They recently released their first LP, No Worries, and it caught our ears immediately.  There is youth, there is fire, but there is also maturity in the sound of WAG.  Here’s why we think it deserves a listen and some of your time on July 23rd at Brick and Mortar in San Francisco.

The band is made up of New Englanders Lucas Nevrla, Jordon Darula and Hayden Strong.  A few years ago the three moved to the West Coast and made a home in San Francisco.  Drummer Mario Garcia is the lone California native, but WAG already have that San Francisco vibe going for them.  Those melodic tracks like “New Devils” and “Melt” are perfect for your stroll through the Tenderloin and up around Polk St., and by the time you get to “Shed” the Embarcadero looking across the Bay isn’t a bad place to be.  It’s punk rock at times, garage at other, but it stays bright enough to make you appreciate what’s good in life.

We spoke to guitarist Jordon Darula about what makes WAG do their thing.  Here’s what we found out about the San Francisco four piece and their origins and future:

Lucas, Hayden, and myself went to middle school together in New Hampshire while playing in punk bands until we graduated high school. We moved out here together a couple years ago and found Mario Garcia. He learned drums for WAG, and fancies himself to be a blend of Ringo and Keith Moon. Hayden’s a Nirvana addict. Lucas loves Against Me. And I am aspiring to create “Punk Floyd”.

So what brought these four from the edges of our country to San Francisco to make music?

The city itself is incredibly inspiring. The album is about adaptation, confusion, and displacement. We wanted to create an empathetic album, because while we believe that the musicians here are talented, so many of them seem to focus on nailing a sound that has already been perfected- 60s garage, psych, spaghetti western. We wrote the songs that we wanted to hear and play. Songs that inspire teenagers to pick up a guitar & unplug from the homogenized mass media culture.  No Worries is about living in wonderland.

If living in wonderland sounds like your thing, WAG might have the soundtrack for you.  The band is having their official album release show on July 23rd at Brick and Mortar in San Francisco.  Check out No Worries below and if it strikes a nerve check out WAG live for only $5.  Tickets are available at the link below.  You can stay tuned to WAG on their Facebook page and check out more music from the guys on Bandcamp.