Groove Cruise X is less than two weeks away, and let’s just say our friends at Whet Travel and the Groove Cruise are planning an anniversary party that you will never forget.  Regardless if you have been on ten Groove Cruises or the voyage starting January 30th is your first, Groove Cruise X promises a lineup full of diverse talent, guest artists and DJs from around the world, and more than enough fun and debauchery to cram into four days on a cruise ship with your closest pals.  It’s our job here to point you in the right direction, but trust us when we say you really can’t go wrong.  The Groove Cruise is fun all the time, and the best part about it is that you’ll discover some of your new favorite DJs over the 96 hour trip.  So take this guide with you as a suggestion to can’t miss acts and parties, but keep in mind there are literally hundreds of other experiences to have on the Groove Cruise that you’ll be discovering as you go.  Check out our Ten Things to Expect on the Groove Cruise guide here, scan the lineup below, and scroll down for our recommendations! 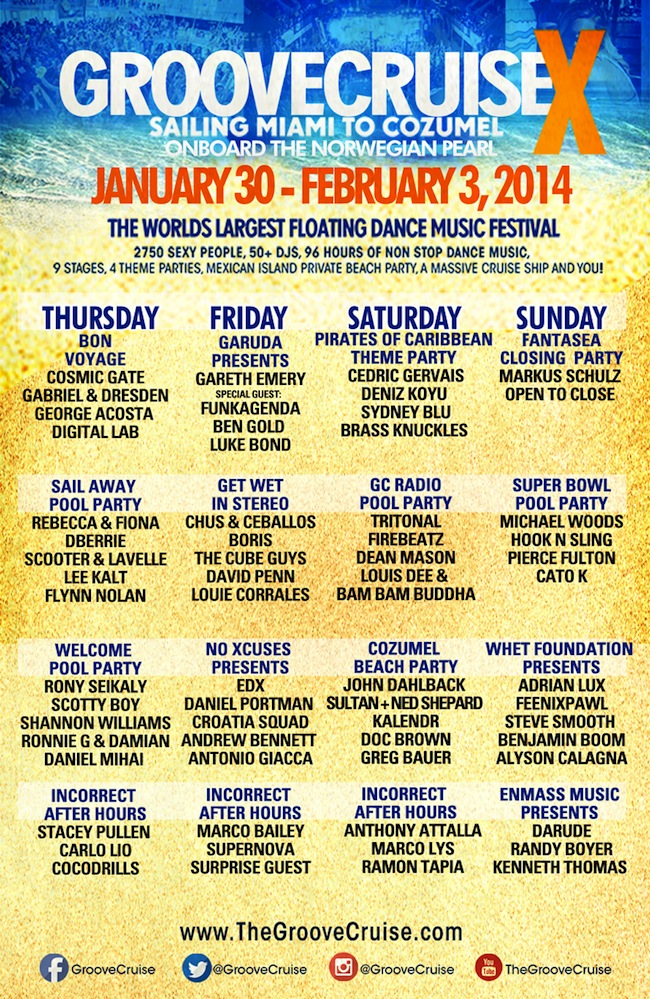 The San Francisco duo of Josh Gabriel and Dave Dresden have been on the scene for over a decade now, but it hasn’t been smooth sailing the whole time.  Even though they’ve been widely regarded as some of the top trance DJs from America over that time, the two split up eight years ago to pursue efforts alone.  In 2011 the duo was back together and playing shows across the globe.  Gabriel & Dresden are still the same type of artists that will build you up and bring you down.  Their flavor of trance has always been one to take the listener on a journey and we can’t think of a better way to get Groove Cruise X Miami started than their opening set on the Bon Voyage party.

And then there’s the German duo of Cosmic Gate.  Cosmic Gate has a similar story to Gabriel & Dresden in many ways.  Both acts have seen their popularity in the mainstream slip over the years, but both are recognized as some of the best in trance music.  Cosmic Gate have been around a little longer debuting back in 1999, but they still bring it every night almost fifteen years later.  Two of the best duos in the business kick off the Groove Cruise X- be there.

Born and raised in Switzerland, Daniel Portman began his electronic music voyage at a very young age. Portman dropped his first EP entitled “Backside/Evolution” followed by the EP “I never sleep” in the mid 2000s. His fan base grew rapidly allowing him to perform all over the world. His style has been described as a mixture of progressive house and techno, accompanied with soulful grooves and even robotic edges. His songs have been featured on Beatport’s Top 100 list for quite some time now, also being played by other DJs regularly. Make sure to catch his set right before EDX at the No Xcuses Presents party!

Gareth Emery has been building his musical empire for over a decade now, starting with his days in Manchester where he ran a record label and night club. Bursting on the electronic music scene in 2002, Emery quickly established himself as a force to be reckoned with. One of his first releases entitled “Mistral” was quickly picked up and embraced by big names such as Armin van Buuren, Tiesto, & Ferry Corsten. Emery has been climbing DJ Mag’s Top 100 List ever since, making it all the way to #7 in 2010. Emery crosses genres so frequently and effortlessly, even being quoted stating he doesn’t want to be narrowed down to one genre and just wants to ‘play good records.’ He’ll be sure to spin one of the most distinct and diverse sets on GC X, so his Friday performance is an absolute must-see!

We really feel in love with Funkagenda on the Groove Cruise LA 2013.  Not only did he play a ton of sets on the cruise, but he was also everywhere and easily found.  Funkagenda was one of the artist you felt like you got to know on the Groove Cruise, and Miami should be no different.  This is his only scheduled set, but we are sure he’s going to pop-up somewhere else on the boat.  Still though, don’t miss this Special Guest appearance.

Pirates of the Caribbean Theme Party with Cedric Gervais
(Saturday)

French house DJ Cedric Gervais built a passion for electronic music very early on, leaving France for Miami at the age of 15. He was able to secure residencies at a lot of the big clubs there, strengthening his name and brand over the years. He released his first album in 2006 under Ultra records and hasn’t looked back. His songs have been featured as Pete Tong’s (BBC Radio 1) Essential Tune of the Week countless times. In 2012 Gervais released his single “Molly” which climbed the charts quickly while also sparking some debate due to its content and corresponding racy music video. The song even allowed Gervais to gain exposure into the hip hop world when it was sampled by the rapper Tyga. 2013 was a year when he focused on remixes, the biggest being Lana Del Ray’s Summertime Sadness, which he earned a Grammy nomination for and also reached the #1 spot on Beatport. His headlining set at the Pirates of the Caribbean party is not to be missed! 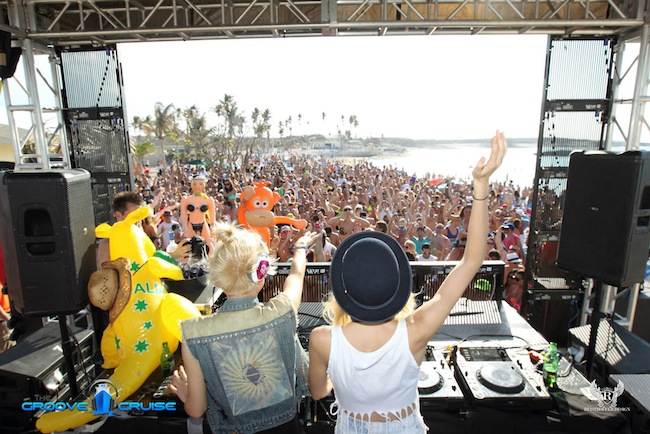 Consisting of Dave Reed and Chad Cisneros, Tritonal is a DJ/producer duo from Austin, Texas. The trance duo released their debut album in 2011 which resulted in eight top 20 Beatport singles, including five that held the #1 trance spot. To this day they’ve produced over 200 songs and have been supported by some of the biggest DJ’s in the world (Tiesto, Armin van Buuren, Markus Schulz, etc.) They’ve also played at some of the biggest festivals in the world, such as EDC (Electronic Daisy Festival), Escape from Wonderland, Ultra Music Festival, and Electric Zoo. They’re known for great stage presence and high energy, so make sure to see them at the GC Radio pool party!

English producer/DJ Michael Woods is known for fusing different genres, mainly trance, progressive house and electro house. He was classically trained at an early age in a range of instruments, such as the keyboard, drums and guitar. Woods initially went by the stage name Warrior and his self-titled single garnered a #1 ranking on the UK Club chart in 2000. Woods became better known for his two singles he released in 2003, entitled “If You Want Me” and “Solex”, and has been consistently releasing music and attacking the charts ever since. His 2013 single “Clanga” has been played by some of the biggest DJ’s in the world, with a strong presence in the Music Festival circuit. Make sure to catch his set at the Super Bowl pool party!

Swedish DJ/producer Adrian Lux burst onto the scene with his smash hit single “Teenage Crime” in 2010. It climbed the charts and was even featured on Swedish House Mafia’s debut album Until One. His self-titled debut album came in 2012 and included other hit singles such as “Alive”, “Fire” and “Burning.” Lux has had a monstrous past few years, but we’re sure the best is yet to come from this techno/house powerhouse!

Some people come from all over the world to attend the Groove Cruise, and so do some of the artists.  Feenixpawl is making the trek from Australia and they are all house all the time.  We talk a lot about trance and experimental on these pages, but there’s no denying that a good straight house music party is where a lot of us got started in this scene.  Feenixpawl have remixed some of the biggest tracks and singles in the world (Ellie Goulding’s “Lights”) and there’s no doubt they’ll be bringing out more than a few you recognize.  But wait, “In My Mind”, you know it, right?  That’s their track.  This should be fun, and isn’t that why we are all here? 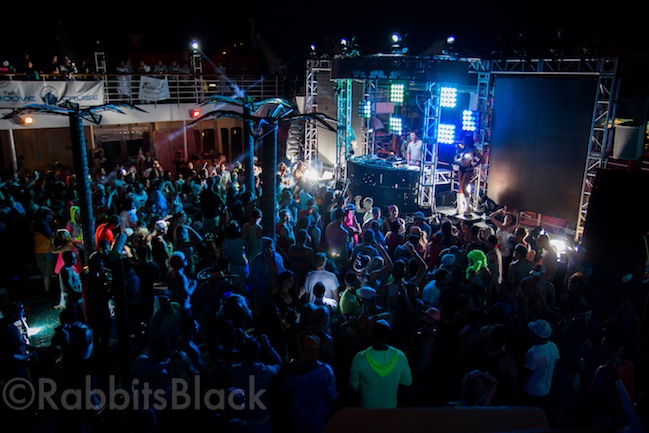 First of all, everyone should be at the Groove Cruise X Closing Party- everyone!  There’s no way this 92 hour party is not ending with a giant send off, and there’s no better DJ to do that than Markus Schulz.  The man is famous for his open to close sets, and the Groove Cruise X in Miami is getting that special treatment.  Markus was another artist who was easily found on the Groove Cruise in LA, and he gave us some truly spectacular moments including his secret pool party set on Sunday.  If we know Markus, he’s going all out for this one and the Groove Cruise Fantasea Closing Party is going to be absolutely ridiculous.  We know you’ll be there, the question is can you last the whole time?  We think so.