Five studio albums would be considered a full and complete career in today’s music industry.  Now imagine that those five recorded albums (officially three EPs and two LPs) were all produced in less than a ten year period.  There’s only one word that describes that type of output- passion.  8mm is passionate about their recorded material, never allowing corporate influences or record label appointed producers to dictate their sound.  They are passionate about their live performance, going as far as launching a Kickstarter campaign to allow the band to bring their stage show to fans around the country who pledged over $37,000 to the cause.  They are passionate about each other, a husband and wife duo with an undeniable chemistry that has created this living and breathing entity called 8mm.  And they are also passionate about using their immense talents to make a positive difference in this world.  All of these traits will come together to make for an unforgettable night this Saturday when 8mm headlines the Dakota Lounge to benefit PATH.

8mm’s distinct sound was born from the storied land of New Orleans.  It was in The Crescent City where Sean Beavan met Juliette.  Sean was working with Trent Reznor on expanding the sound of Nine Inch Nails at the infamous Nothing Studios in the Uptown neighborhood of the city.  Sean was one of Trent’s earliest musical collaborators, and is credited for mixing the iconic albums Pretty Hate Machine and The Downward Spiral.  While Sean was becoming an expert at refining artists in the studio, it wasn’t until many years later that he uncovered the vocal talents residing within Juliette.  The two had moved to Los Angeles during the recording and producing of Marilyn Manson’s 1998 album Mechanical Animals.  While Sean was producing an album for the band Kill Hannah, the need for a female voice in the chorus on one of the tracks arose.  Sean asked Juliette to try for the part, and from that moment on things escalated quickly.  An undeniable talent was discovered and 8mm was formed shortly after. 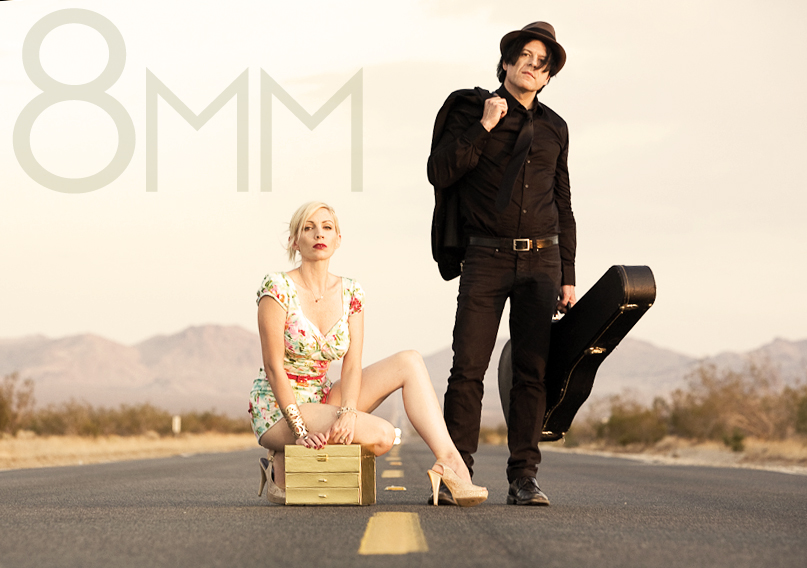 Understanding how 8mm came to be is an important element in appreciating their music.  This was an organic creation of what was seemingly musical destiny.  Each 8mm release offers the listener something different.  Their 2005 debut release Opener EP is almost impossible to define.  At times dreamy electro-pop and then suddenly trip-hop.  Check out the chorus on “Nothing Left To Lose” from Opener EP and then listen to “You Know” from the 2006 release Songs To Love & Die By.  Ya, this is the same band and the same Juliette Beaven on vocals- we promise.

There’s a commitment to honesty in the music of 8mm.  Every song is an expression of a feeling and time that was truth in that moment.  Moments change, emotions become complex, and over time all that we can look to for understanding is the recorded material that a band creates.  8mm’s recordings carry with it a genuine feeling that many bands failure to capture on a single song during their entire career.  For their 5th studio album, Between The Devil and Two Black Hearts, it would have been easy for the band to take in record label money to produce the album and fund the tour.  Grammy-nominated producers in Los Angeles like Sean and artists like Juliette don’t go unsigned for long.  But that wasn’t the direction the band wanted to take.  Instead they self-released the record this past September, allowing them the freedom to create the songs and sound that they truly wanted.  How else could you get this explanation when the band was asked to describe the new album: “Think PJ Harvey and Led Zeppelin go to the desert and end up at a rave in a David Lynch movie”.  Listen to Between The Devil and Two Black Hearts for yourself below:

8mm has perfected the skill of providing consistent thematic undertones even though the sound and genre can change from track to track.  Between The Devil and Two Black Hearts feels at times like it’s been ripped from the lost archives of A Perfect Circle recording session, and by the time the next track is only 30 seconds in, you swear you are traversing through the New Orleans humidity along the bayou with two wayward cowboys.  But one thing that never leaves you is the soul of the music- it’s a fiery being that never loosens its grip on the listener.

It’s hard to find a band more passionate about putting on an amazing performance for their fans while also supporting a cause they believe in.  The beating soul of the band is what makes their music so captivating, and it’s also what makes Sean and Juliette human.  For 8mm, this is not a weakness, but instead the strength of the human and musical experience.  That strength will translate into a concert experience that will be truly unique for both old fans and new fans this Saturday at the Dakota Lounge.