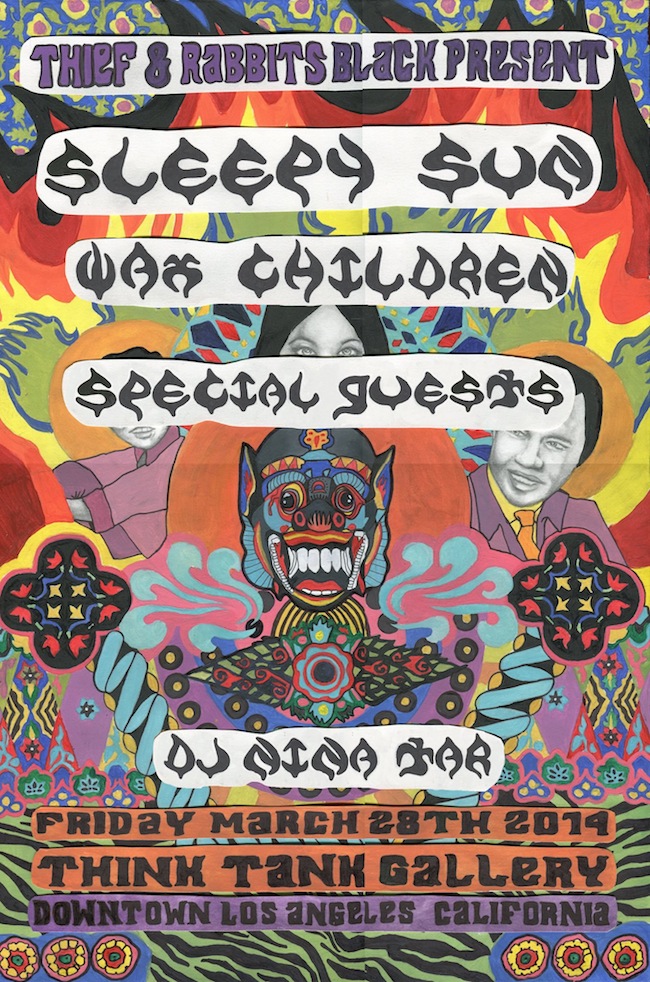 Psycho De Mayo, the largest gathering of psych-rock bands on the West Coast, isn’t until May but that doesn’t mean we are waiting until then to get the musical assault on your mind started.  Psycho starts this month with the Rabbits Black and Thief Presents official pre-party with Sleepy Sun and Wax Children at the Think Tank Gallery in Downtown Los Angeles on March 28th.

Psycho De Mayo is set to become one of the country’s premiere psych-rock festivals this year following it’s impressive debut in 2013.  When Rabbits Black decided to get together with Thief Presents, the do-it-all concert promoter and our friends behind the festival, to make this year’s psych-rock fest in Orange County even crazier than last year, some mind-bending pre-parties where definitely something we had in mind.  Well here you go!

We’re combining forces from San Francisco and Los Angeles for this one.  It doesn’t get much better than Sleepy Sun in terms of San Francisco’s current scene of psych rock bands.  They recently put out their fourth LP, Maui Tears, this January.  It’s an early favorite here at Rabbits Black, and getting these guys down to Think Tank Gallery is reason enough to come out on Friday night.  There’s more though, of course!

Wax Children from Los Angeles are on the bill along with a DJ set by Manny Lopez from DAHGA BLOOM.  It’s a family affair on March 28th at Think Tank Gallery combining shoegaze, experimental, and every other genre that you can imagine or explore.  If you haven’t been to a Thief Presents event at Think Tank than you are missing one of LA’s best do-it-yourself concert experiences.  Thief transforms the Downtown LA art gallery and loft into a wall-melting experience, complete with every touch of psychedelia that you can imagine.  This isn’t your Live Nation venue, this is all about the music and knowing where the party is at.  Now you know, so let’s get you in.  Tickets are only $10 pre-sale and $15 at the door.  Grab tickets at the link below to save yourself from the stress!

Check out tunes from Wax Children’s new album Angst here.  It’s going to be a Rabbits Black and Thief party, and those are never something you want to miss.  Keep up with the latest on the event over at the Facebook Page and click that button that says you are going after you buy your tickets!

Don’t forget to pick up tickets for Psycho De Mayo 2014, and did we tell you about those tripped out Psycho School Buses leaving from all over LA to the fest?  Dead Meadow will be on-board, will you?

Doors at 7 PM this Friday at Think Tank Gallery!  Music starts at 8 PM.