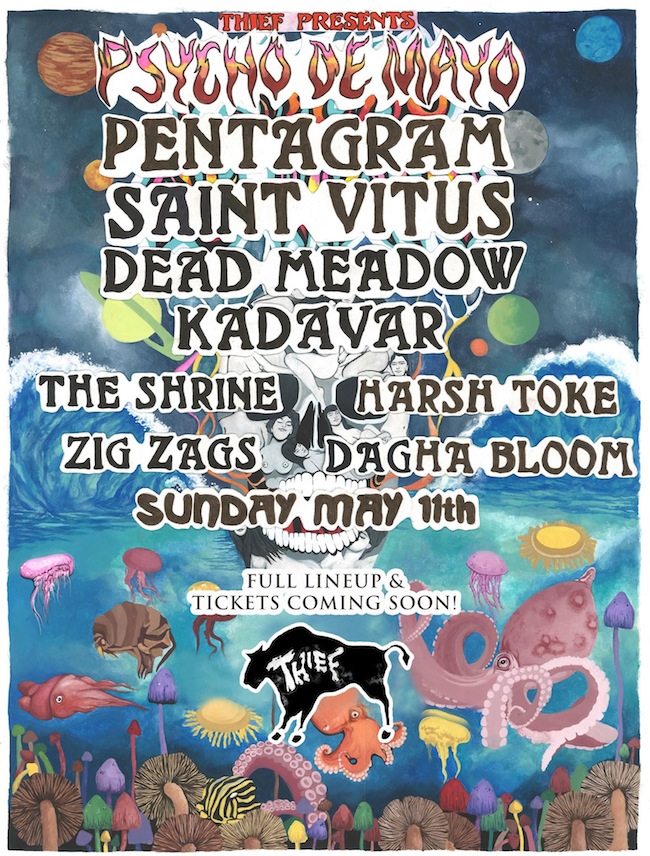 Now in it’s second year, Thief Presents Psycho De Mayo is poised to become one of the country’s premiere psychedelic rock music festivals.  Only a week after Austin Psych Fest, the second year festival held in Orange County is building on the success of its inaugural event last year with more bands, more stages, and the most mind-numbing rock than you can handle in a single day.  Psycho De Mayo brought in people from all over the world last year, and this year with the inclusion of more international acts, attendance numbers are expected to rise.  It’s clear that Psycho De Mayo is becoming a premiere music festival for those who like their music heavy and mind-altering.  Don’t believe us?  Just check out the announcement of the first 8 bands for this year’s festival:

The people at Thief Presents are stepping it up a notch for PDM 14.  We are happy to see Rabbits Black favorites Dead Meadow on the bill, along with bonafide festival headliners in Pentagram and Saint Vitus.  Kadavar are the first of many international bands to be announced, and the California and local love is all over this with The Shrine, Dahga Bloom, Zig Zags and Harsh Toke.  Tee Pee Records, one of our favorite labels, has a strong presence here and that’s something we can dig any day.

The festival is taking place on Sunday, May 11th from Noon to 2 AM in Santa Ana at The Observatory.  Over 20 bands are expected for this year’s festival along with unique street vendors and psychedelic art installations.  There’s word that a special third stage dedicated to experimental electronic music will be making the bill as well- whatever melts your mind and senses we are in for.  So that brings us to the next big announcement, Rabbits Black is all in for Psycho De Mayo.  We are partnering with Thief Presents to bring you some awesome experiences for PDM 14 that you can’t get anywhere else.  We can’t reveal all of our surprises just yet, but expect contests and giveaways that go beyond simply winning tickets, unique ways to get you to Orange County and back, exclusive interviews, and a Rabbits Black lounge at the festival for you to experience Psycho De Mayo in its fullest.