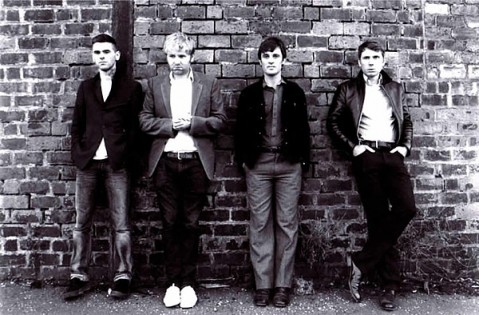 In this installment of the Outside Lands Primer, we revisit Franz Ferdinand, the art school Scottish rockers whose tracks have been soundtrack to many a memorable night with the RabbitsBlack crew.

Franz Ferdinand formed in Glasgow, Scotland in 2002. Made up of Alex Kapranos (lead vocals/guitar), Bob Hardy (bass), Nick McCarthy (rhythm guitar/keyboard/backup vocals) and Paul Thomson (drums/backup vocals), the band first broke onto the scene in 2004 with the infectious “Take Me Out”. Delving deeper into Franz Ferdinand’s self-titled debut album revealed the wickedly addictive “This Fire”, which made us realize that aside from making crazy catchy tunes, Franz Ferdinand’s songs carry an enticing message of rebellion and decadence. The band received abundant critical acclaim for Franz Ferdinand , including two BRIT Awards and a nod from NME for the Best Album of the Year in 2004.

The band followed up their debut with the excellent You Could Have it So Much Better in 2005, another top album of 2005.

What’s wrong with a little destruction? We’re all for it, frankly.

So where have these guys been lately? Franz Ferdinand dropped off the map after 2009 and the release of their last two albums: the underwhelming concept album Tonight and Blood, a collection of dubby remixes from Franz Ferdinand’s previous three albums.

Happily, the Scottish band has emerged from the woodworks of Govan, Scotland and been playing festivals around the world in anticipation of the release of a new album. NME reports they played four new tracks at the Open’er Festival in Poland: “Scarlet Blue”, “Trees and Animals”, “Right Thoughts” and one more track that went unnamed. Franz Ferdinand is making political statements too, speaking out against the imprisonment of the Russian Punk band Pussy Riot at a recent Moscow show.

Word is the album will drop next year. In the meantime, you can catch Franz at Outside Lands on Sunday, August 12.

This is David. I was finally able to find this site after looking through my cellphone history! turns out my mobile network was turned off that night and I couldn’t access the internet. Anyway, this article is pretty solid. Franz Ferdinand is a pretty badass band! Hope to hear from you again.