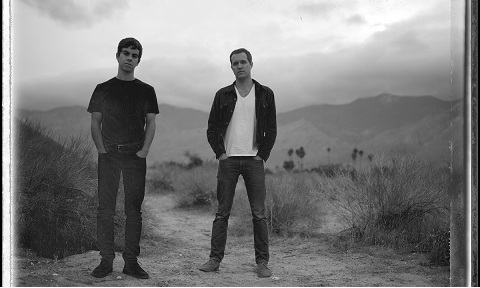 In this day and age of digital dissemination of information, it’s rare to find any music act so shrouded in mystery as the LA-based duo Electric Guest. Their website, although visually striking, doesn’t divulge much besides their current or future whereabouts. In this week’s primer, we tell you what you need to know about the mysterious twosome who will be gracing the stage of Outside Lands with their particular brand of soulful synthetic pop.

Electric Guest‘s music is simultaneously retro and modern – with a spacey 60’s pop feel tempered by synthesizers, a healthy current of funk, and smooth falsetto courtesy of Asa Taccone.  Some critics consider EG’s debut album Mondo to be a satiric work of R&B parody and they fault tracks that aren’t clearly either “poignant or punch line“. These high standards for a debut album verge on ruthless and owe much to the band’s star-studded history.

The groundwork for Electric Guest was laid years ago when Asa, brother of The Lonely Island‘s Jorma Taccone, composed instrumental tracks that he played for his brother’s friend, Brian Burton- the Grammy-winning producer Danger Mouse. This was way back in the day when Danger Mouse was fresh off the production of the Grey Album.  Burton was immediately impressed with Taccone’s experiments. He encouraged Asa to pursue his passion and mentored the aspiring musician through periods of artistic uncertainty and transition from the Bay to LA. Taccone even moved into Burton’s old room in the Mt. Washington neighborhood of Los Angeles, which is where he met Matt Compton. The two started jamming away, and Electric Guest came into existence.

Burton is standing strong by EG, whose debut he produced. Their music may not make any grand statements, but it’s damn catchy. Check out their single “This Head I Hold” to see what’s got us intrigued.  The band’s live shows are uncharted territory, however they’re playing a handful of shows around Los Angeles in preparation for Outside Lands, including a show at the Viper Room on Monday, June 16th and an appearance at Make Music Pasadena  on Saturday, June 16. Where do you stand on this divisive band?

Great article!! So into Electric Guest right now. Cant wait to see them play at the Viper Room Monday night!

See you there Hillary! Don’t forget, they’re appearing at Make Music Pasadena this Saturday as well =)