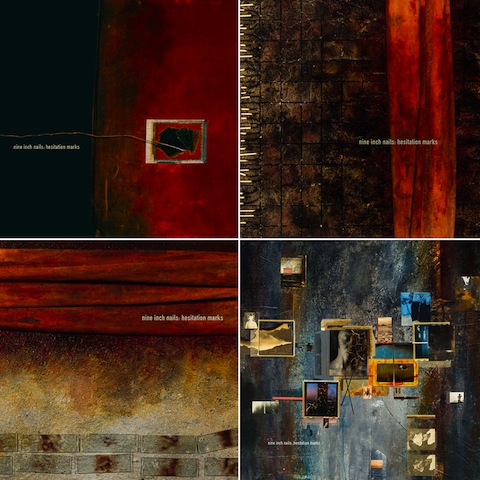 Nine Inch Nails’ eighth studio album Hesitation Marks is a really big deal.  It is (with all respects to Josh Homme and company) the most anticipated album release in rock, electronic (and quite possibly dance) music this year.  The Tension 2013 tour hasn’t even begun and high fidelity recordings of Hesitation Marks haven’t even been heard, and it still feels like Nine Inch Nails is the biggest thing to happen in music this year (you can thank their towering shadow effects festival stage show for that as well).  September 3rd is fast approaching and the Nine Inch Nails machine is in full gear.  Starting on Monday, scattered throughout Los Angeles will be record release events where you can buy Hesitation Marks, get some free food, and hopefully draw the winning raffle number to get you this year’s most ridiculously sought after ticket.

Four of Los Angeles’ most iconic record stores will be holding special release day events starting on Monday.  If you buy Hesitation Marks from one of these stores, you’ll be able to grab a free menu item from the specially selected food truck outside.  Yes, Bacon Mania is the food truck at Sound Spectrum in Laguna Beach.  No, this is not the “pig” that Trent has been screaming about all these years.

Don’t leave after grabbing the record and some food.  At these locations at 10pm you can obtain a raffle ticket (no purchase necessary) for you and a very very special guest to attend the record release show at The Troubadour.  This show is easily the hottest “ticket” in town, and since you can only win your way in, grabbing a raffle ticket might be the “Charlie and the Chocolate Factory” moment of your life.  You can read our complete show preview for Nine Inch Nails at The Troubadour here.

And if that wasn’t enough Nails news for you, check out the video that just released showing a behind the scenes look at the band’s production lead-up to their first festival show in Japan this past July.

If we hear anything else, you’ll be the first to know.