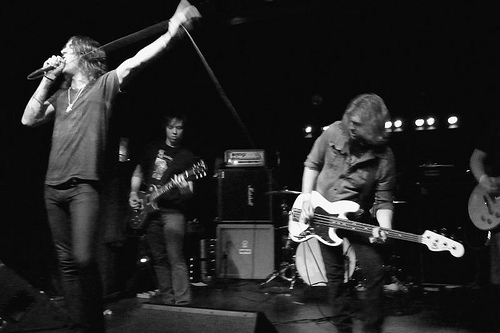 Alright, it’s taken us awhile to get this review up, but trust me when I say it will be worth the wait.  Night Horse might not be a name that you are familiar with, but you should be and will be.  Here is the simple reason why: Night Horse is one of the most genuine local rock & roll outfits you can see in Los Angeles and if you are not at their next show you are simply missing out!  Night Horse released their second full length album this past fall with Perdition Hymns.  The album is pure rock & roll spirits with a southern-blues-rock attitude that moves fast and gets you dancing.  The same description can be applied perfectly to their live shows.  After announcing to the crowd with a few vibrating chords that the show was about to start, frontman Sam James Velde got the show started with his Sunset Blvd. cowboy bravado taking over center stage for the opening song “Confess To Me”.  The show would be a non-stop ride from beginning to end.  Some of the standout tracks from the new album translated flawlessly into the live performance.  “Come Down Halo” and “Angel Eyes” are two of my favorite tracks from any artist in the last few months, and live they ring with the same energy and vivacity that the album provides.  The one thing that a Night Horse concert can provide that the album can’t, is just how much fun this band actually is.  The Echo had maybe 50 or 60 people there to see them, but everyone in attendance was there for the right reasons.  How can you not have fun when the guys on stage are loving every minute of it, and guitarists Justin Maranga and Gregory Buensuceso kill it song after song on rhythm and lead.  For a band like Night Horse its the drummer that keeps the energy together.  Fast paced rock like this needs a strong bass line and drummer to keep the energy intact, and both members of Night Horse delivered on that responsibility during the show.  If the bass work from Nick Lee D’Itri and the hard hitting drums of Jamie Miller didn’t get you dancing during the show, then you must have be in the wrong place, because the energy was flowing through the building for anyone that claims to like rock & roll the way it used to be before the Indie scene took over.  And that right there might have been the best part of the night in whole- the scene, people, venue and music.  Night Horse is the perfect local band to see because they care about their music and art, will keep you dancing all night, and you still have the chance to see them for less than $10 with less than 100 people.  In Los Angeles, we take the abundant amount of local bands and shows for granted, and it makes it a daunting task to find new music that’s worth your money and time.  So here ya go.  Here is one of the best rock & roll bands touring right now, and they are right in our backyard.  See them now or miss the train because Night Horse is not doing anything different from their influences, they are just doing everything right.  That’s the best part about their music.

Night Horse will be playing three shows in the Los Angeles area in February, be there: