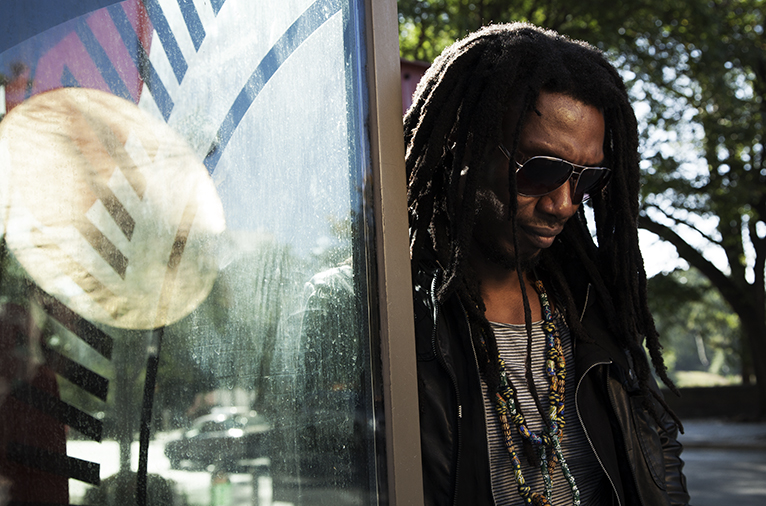 Here is the latest installment in our New Artist introduction series. Let us introduce you to New York City-based roots rock songwriter/singer Kwame Binea who fronts the Kwame Binea Shakedown. They have officially announced the worldwide digital release of their debut single, “Let Go.” Kwame Binea has an array of nearly a dozen special spiritual and musically inspired tattoos engraved on his arms and body.

“We’ve been in the studio writing, recording and performing live for a while,” says Kwame, “so this first single release, ‘Let Go,’ is a big step for us. We felt it was time to give all our loyal fans something they could finally keep. Like most of our songs, ‘Let Go’ embodies the message of peace, love and positivity that propels and drives our music,” he added.

Binea, a lithe and fit 6’5 rocker to the core has a vivacious smile and a full head of dreadlocks cascading to his mid-back (as staple of identity for the past eight years). He grew up splitting time in West London (his birth place) and in his native origins, Ghana. He later moved to Cherry Hill, NJ as a teenager where he started to unearth his artistic aspirations as a burgeoning songwriter/singer/guitarist. He initially teamed up with guitarist/vocalist Justin Wilcox in college and the duo became the nucleus for expanding and founding the multicultural fusion of rock, soul/rhythm & blues, blues and reggae collective that spawned the Kwame Shakedown in Harlem, NY (2011).

“My music is organic,” says Kwame. “This album embodies my roots, love and life’s struggles. I’m driven by my mantra of Peace, Love & Positivity so that propels and drives the messages for most of my lyrical content. It’s also party music and danceable, so if our music moves you and makes you move, that’s a great night,” he added. “Roots Rock” starts where you think it does, from your roots.

“Let Go” showcases Kwame Binea Shakedown’s abilities to blend together contemporary sounds of Soul and Rock. The vocals along with the instrumental generate an uplifting rhythm that will get you grooving out of your seat. Lyrically, the band enforces a positive message that makes it relatable and motivating for a vast audience. For that reason, the band has garnered lots of success within the New York area which has brought them a solid fan base and concert attendance at some of the area’s most iconic concert venues such as the Brooklyn Bowl, Mercury Lounge, and Rockwood Music Hall. This single will give a sneak peek of what listeners will get in their upcoming EP.

“Let Go” is a rock/funk/soul song that lyrically invokes and offers an inspired message that the best way to overcome a spurned lover or lingering adversity is to think positive, know when it’s time to move on and just let go. It was co-written and produced by Kwame Binea and guitarist Justin Wilcox for Binea’s indie imprint, Pelopos Entertainment Group. The song also features the rest of the Shakedown band, drummer Medley Shabazz, guitarist Art Vanterpool, bassist Phil Bass, Daron Wright on keyboards, Kengo Yamada on saxophone and Brian Varneke on trumpet. The “Let Go” video was culled from a Kwame Binea Shakedown live performance at the Brooklyn Bowl earlier in 2015.

Now that the EP is coming out we’re looking forward to West Coast tour dates! Our readers will definitely be among the first to know.