Life is Beautiful Festival returns to Downtown Las Vegas this weekend after its successful inaugural go in 2013. Expanding to become a full three day festival, Life is Beautiful 2014 features an on-point lineup with a solid mix of rock, hip hop, electro; established acts and up-and-comers in a vibrant, art-filled setting.

Headliners this year include Foo Fighters, Outkast, Kanye West, Arctic Monkeys, Lionel Richie, Alt-J, The Roots, TV On The Radio,, and Fitz and the Tantrums. You may already know which big acts to, but here are some lesser-known acts it behooves you to check out this weekend:

Milky Chance – Making waves with the smash hit, “Stolen Dance”, be among the first to see what else this German duo has to offer. 2:10 on the Downtown Stage.

Holy Ghost! – One of the best acts at this year’s Pacific Festival, they’re playing at 3:40 at the Downtown Stage

Pussy Riot – The Russian punk band/political protesters will speak as part of the LIB Learning series. 4:05 at the Western Hotel.

Phantogram – passionate tunes, a powerful female vocalist, and an incredible light show. 5:15 at the Downtown Stage

Girl Talk – You’d better have your dancing shoes on for the master of mash-ups. 6:50 at the Ambassador Stage.

We don’t have to tell you to catch:

The Preatures – Funky, synth-driven disco reminiscent of Daft Punk’s latest. Sexy stuff worth making the trek out early for. 2 PM at the Downtown Stage.

J. Roddy Walston & The Business – What’s a rock festival without the blues. Get your fix, 5 PM at the Western Stage

Kimbra – Fun, cheeky dance tunes at 8:15 on the Western Stage

TV On The Radio – They’ve only made more fascinating, frenetic music since 2006’s Wolf Like Me. 7:25 at Huntridge

Don’t have to tell you :

Broken Bells – Danger Mouse and James Mercer of the Shins – 6:05 at Downtown Stage

We don’t have to tell you:

We’ll be tweeting and Instagramming our favorite bands all weekend long so stay tuned! Follow me too @RabbitsSteph. 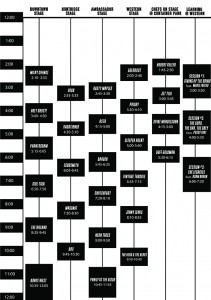 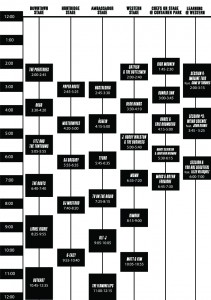 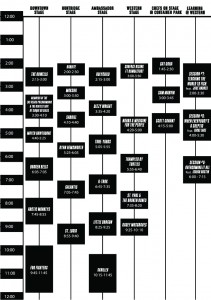