Mike Posner just delivered one of the best small venue/intimate performances we’ve seen in a very long time. Every song he performed at the Hotel Cafe in Hollywood oozed with emotion, heartbreak, struggles with himself, his family, his friends, and fame in general. We felt every note and left as if we had truly created a bond with him. That in addition to the fact we bumped into him before the show and he was so kind and appreciative of everyone who had come out to support him. Seeing that level of humbleness first hand from an artist you admire only makes you admire them even more. Anyone who has had a similar experience knows exactly what I mean!

Let’s rewind to give you some background on how this performance came to be. Posner first popped up in more of the hip-hop scene during his time at Duke University, releasing a series of mix tapes which he fully produced right in his dorm room. One of the biggest songs to come off his mixtape, “A Matter of Time”, was a collaboration with his hometown friend, Big Sean, entitled “Smoke and Drive.” Posner’s dark and classic key melody and raspy vocals made this song an instant classic with his growing fan base, not to mention immortalizing a verse from an artist who is now one of the biggest names in hip-hop.

Posner signed a deal with RCA/Sony after his junior year at Duke, but returned to school to finish his degree. He juggled school, touring, and recording his debut album all that year (not to mention also releasing his final mixtape “One Foot Out the Door”, which featured two more collaborations with friend Big Sean).

Posner released his debut album “31 Minutes to Take Off” in 2010. The first and biggest single “Cooler Than Me” reached number six on the Billboard Hot 100. The following singles “Please Don’t Go” and “Bow Chicka Wow Wow” both reached the top 20 and 30 spots respectively. After a long stint of touring, Posner began to work on his second album in 2011, but only ever released one single entitled “Looks Like Sex.” It was at this time fame and the music industry began to take its toll on the young musician, who has struggled with depression since high school. He became uncomfortable with the spotlight and began to produce and write for other major artists. Posner wrote and produced Justin Bieber’s “Boyfriend”, produced, wrote and was featured on 2 Chainz’s “In Town”, and more recently co-wrote Maroon 5’s “Sugar.”

It’s clear over the last few years Posner has enjoyed writing and producing songs in more of an out-of-the-spotlight type role, but he is now ready to give it another chance. Posner just released a 4 song EP entitled “The Truth”, which is slower than his previous releases, but seems to be his purpose. Jam packed with emotion and honesty (“I’m just a singer, who already blew his shot; I get along with old timers because my name’s a reminder of a pop song people forgot”) this EP takes more of a folk/country turn but it results in an incredibly insightful and beautiful story.

The Hotel Café in Hollywood is a very intimate venue, with a capacity of 165 people. From someone who has performed in venues such as Madison Square Garden, you can imagine how different this was for him. He easily could have booked a bigger venue, but he truly wanted to connect with people, interact and have them leaving the show as if they had truly bonded with Posner. With the new direction his music has taken, we went into the show wondering if he would do only the 4 songs off The Truth and that’s it. Boy were we wrong. He started with his new song “I Took a Pill in Ibiza” but quickly went into some of his more familiar songs like “Bow Chicka Wow Wow” and “Drug Dealer Girl”. He brought up a few friends to help him on the keys, guitar and vocals and it became immediately clear that he only surrounds himself with true musicians. He also performed “Buried in Detroit” off his new EP, which is almost assured to be a single off the official album and a big success. He also announced the official album will be releasing later this year. As if his music wasn’t emotional enough, Posner then admitted to struggling with depression and how his song “Save Your Goodbye” wasn’t actually about a girl, but rather this internal battle with himself. All the fan mail he got about the song blew his mind and allowed him to start performing the song once again. To not disappoint anyone in the crowd, Posner finished with his hit singles “Please Don’t Go” and “Cooler Than Me” urging the crowd to sing along and connect even more. Great finale to an even greater show! 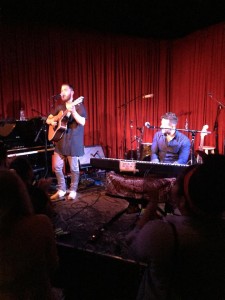 Posner performed last night in Brooklyn, and when he plays more shows you should definitely check him out.