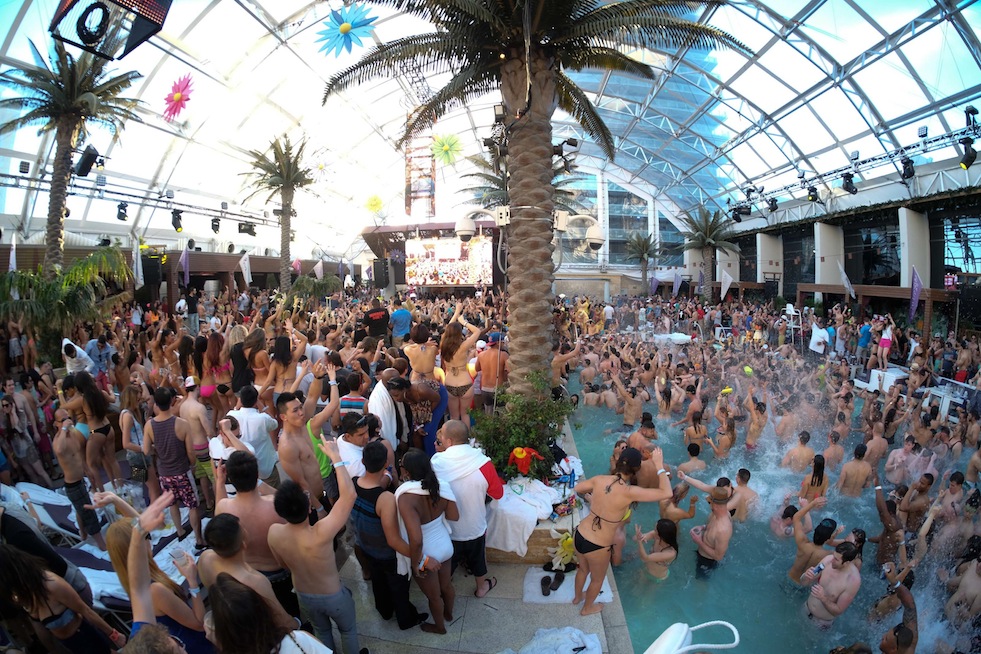 Everything is a competition in Las Vegas.  You find that out quickly in Sin City regardless of the reason that brought you there.  If you are a gambler, competition is at every corner and table.  If you are looking for love, you’ll have a playground at your feet but you are not the only player.  Business meetings and trade shows in Vegas are ridiculously fun, but that doesn’t mean deals are not getting closed at lunches and dinners on The Las Vegas Strip.  And if you are a clubber or all-around party person, Las Vegas is always competing for your attention.  When the pool party scene in Vegas blew up about three years ago with every major entertainment company, hotel and promoter producing a daytime party experience, the competition hit new heights.  While there have been undeniably cathartic moments at every one of Vegas’ pool parties, Marquee Dayclub has delivered the most consistent brand of top DJs and unforgettable parties since it opened its doors, daybeds, and cabanas in 2011.

So when Marquee announced that they would be shaking up the Las Vegas nightlife and day party scene by building a 22,000 square foot dome over the top of Marquee Dayclub, we had to see it for ourselves.  We flew into Vegas in early December to catch one of the best trance DJs in the world, Markus Schulz, performing at Marquee on a cold Friday night on The Strip.  A month before the Dome opened as an extension to the Nightclub, we took some time with Markus to reflect on his residency at Marquee and what the Dayclub Dome could mean to the Vegas club scene:

You were one of the first resident DJs of Marquee when they opened in 2010.  Why have you continued that relationship throughout the years and why is Marquee so special to you?

Markus Schulz: Yeah I’ve been here for quite a while. I remember they showed me pictures and drawings of it before it opened and I was thinking to myself, ‘Wow, this room is going to be incredible!’ So when it finally opened I was really honored to be part of this room and to be here still and see everything that has happened here in this room is fantastic. Because there’s nothing like standing up here in the DJ booth at Marquee with all the production and everything around you. You really feel like the king of the world.

What was one of those truly special performances at Marquee that has stuck with you over the years?

Markus Schulz: Last year when they awarded me the “America’s Best DJ” award. My family was in the audience here and that was the first time that my mother had ever come to see me at a place like this. At a Vegas show like this- she was just blown away! She was telling me about the production, the dancers, everything. She was blown away by it all. It was a very special night. 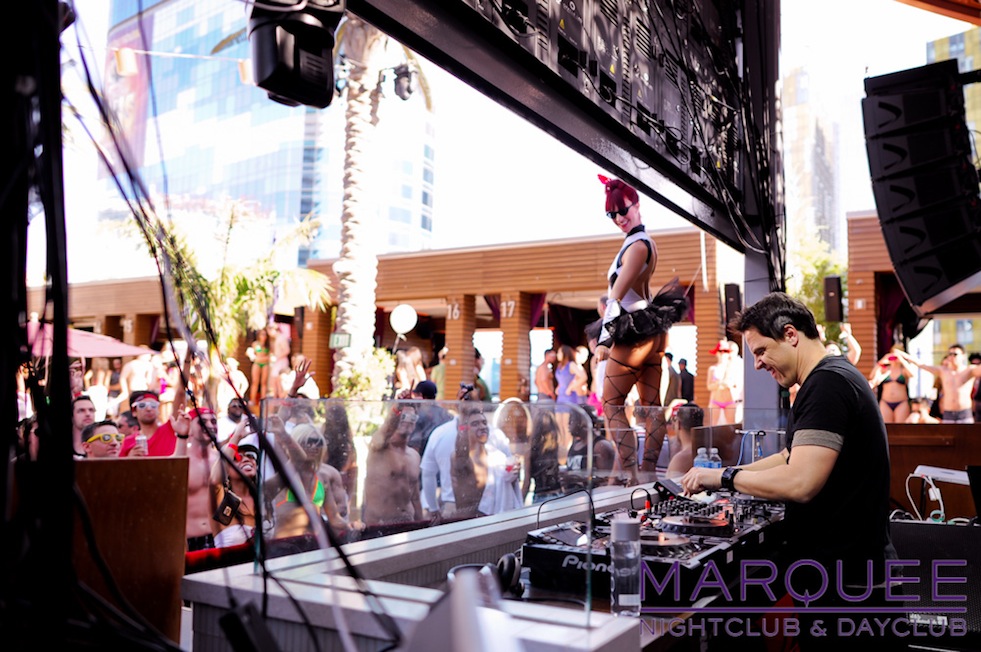 Markus Schulz performs at Marquee Dayclub on May 5th, 2012.

It’s been three years since you released the Las Vegas ’10 compilation mix and album.  What has changed in Vegas over that time?  Would that album be the same today?

Markus Schulz: Probably a lot different only because, especially here in Vegas, there’s a new generation of clubbers that have took over Vegas. This is definitely not your father’s Las Vegas. It’s not the cigar smoking and black jack playing old guys anymore. It’s a young and beautiful audience and with that comes a new energy and this new vibe. I’m really happy to see the transformation that Vegas has gone through and all of the night life action that’s going on here. If you fast forward three years later obviously a lot has changed because dance music, the EDM scene, has really changed a lot in the last three years. If I did a Las Vegas compilation today it would definitely represent those changes.

What do you envision the Dayclub Dome doing for Vegas night and daylife?

It was clear from our conversation with Markus that the artists were excited about the new developments at Marquee (you can read our review from his performance in 2012 at Marquee Dayclub here).  Markus is one of the most well respected DJs in the industry, and his words carry a lot of weight.  He’s also a fan favorite that packs Marquee with loyal followers of his music, whether he’s playing inside at night or outside during the day- the fans always come out for Markus.  Scoring a DJ of his caliber and reputation has helped Marquee stay at the top of their game.  When the artists are happy and can translate that into an amazing show, a lot of the hard work is already done in getting people to the venue.  Feeling the excitement build for what the Dome could mean to a Vegas party weekend, it was time to experience the new structure for ourselves to see what it was really about- to be a part of the experience.  So once again on a cold Vegas weekend we flew out to catch a show at Marquee:

The EC Twins know how to have fun and throw a good party- no doubt about that.  In late January people are still shuffling quickly up and down The Strip with temperatures in the 50s and 40s.  Not that its freezing, but you probably wouldn’t want to spend your night on the patio of a restaurant without a heat lamp close by.  This was the perfect time to see what the Dome could do for Marquee Nightclub.  The main room was packed as always at Marquee with the EC Twins going off, but this night we opted to get grand cabana outside under the Dome.  Definitely the first time we asked to be seated outside in the Winter by choice.  The moment we turned the corner to the Dayclub area, it was clear that this whole Dome thing was kind of a big deal.  Slammed!  With almost every conceivable table taken (the daybeds in the water of course were unoccupied) the Dayclub area was housing more people than the Nightclub. With a grand cabana under the Dayclub Dome, it was easy to see how Marquee already changed the nightlife scene.  This was Marquee on overdrive.  The party was double the size in capacity and attendance from our stop in December, and enjoying the Vegas nightlife from a cabana with a hot tub (not usable at night but the jets were still going for ambiance) at 2 AM was something that we always wanted to do.  Nightclub reinvented- done. 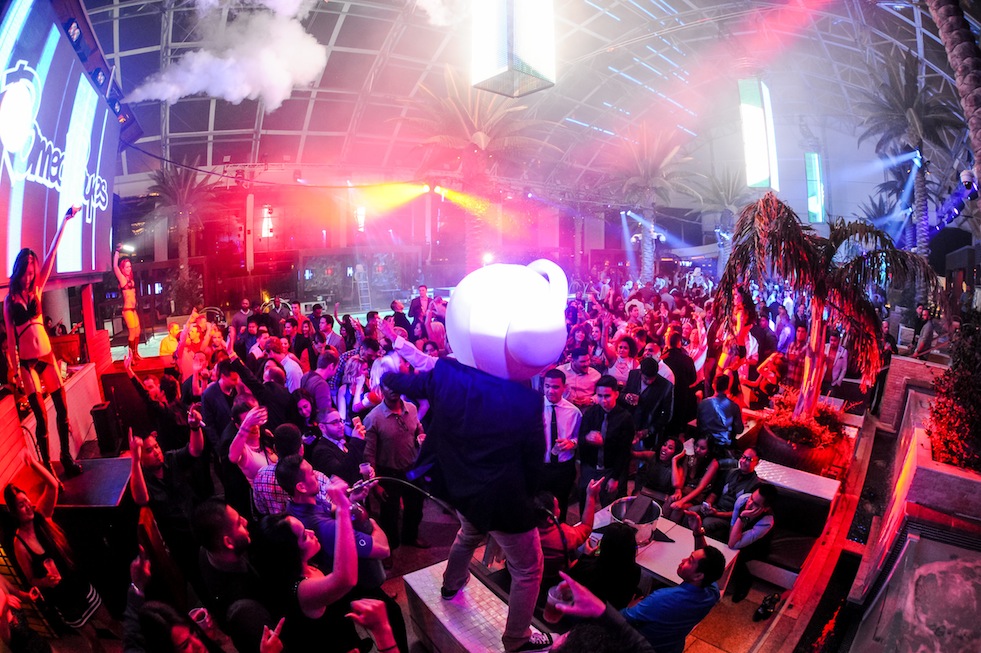 The Dayclub Dome hosts guest while the Nightclub is packed.

But that was just an extension of the nightclub experience, and while the Dayclub Dome was definitely built to extend the party and real estate during night hours, the real test would be what the Dayclub Dome could do during the day when the temperatures in Vegas are frigid for almost half of the year.  Could a Winter pool party in Vegas work?  Would it be as insane as those Saturdays and Sundays in June with the sun beating down and Chuckie or Kaskade playing to a full house and pool?  We sent our Vegas Insider to the Halfway To EDC Winter Pool Party at Marquee this past weekend to check it out.  This was the first ever Winter pool party in Vegas, and Marquee was breaking new ground in entertainment on Valentine’s and President Day weekend.  Our Vegas Insider has not only partied up and down the Strip for close to a decade now, but our insider also has close ties to many of the big players in the industry.  So how was it?

It’s Sunday, just shy of high noon on the Las Vegas strip and there are thousands of people in line eagerly waiting their sacrament. No, this isn’t your typical house of worship, although these disciples would staunchly disagree, but the front door of Marquee Dayclub at the Cosmopolitan.

On this perfect Winter day, the sun is shining with temperatures hovering near 80 degrees inside the perfectly controlled Dayclub Dome, which was constructed over the pool last year.  There are thousands of people converging on the entrance to celebrate among what has become a cult of ever growing EDM followers.  Insomniac, the largest promoter of dance music festivals in the United States and Tao Group combine forces to rally this one of a kind, record breaking Winter pool party in recognition of the halfway countdown to EDC Music festival in Las Vegas which takes place on June 20-22, 2014 at the Las Vegas Motor Speedway.

Yes, the aforementioned was not a typo, a pool party in February made possible by a combination of global warming, Presidents Day weekend, and the brave engineers who dared to build the atrium-like structure some 200 feet above the strip and enclose 22,000 sq. feet of outdoor pool party space.

The crowd is a diverse medley of hard-core partygoers and “one of a kind” Vegas experience hunters. The group is a hodgepodge of people dressed in radiant fluorescent colors (typical EDC garb), swimwear, and winter threads. While most of the northern hemisphere is burrowing out from record-breaking snow fall and sub-zero temperatures, nearly 5,200 lucky individuals (unofficially a record for the Dayclub in attendance by close to 1,000 people) have the elite status of being the inaugural attendees of this special celebration.

The talent was a bounty of EDM pundits spinning from all corners of the EDM genre spectrum. Candyland, Firebeatz, Kennedy Jones, Lema, Paris Blohm and Dash Berlin were the masters of ceremony to this insider’s only event.  Dash produced a powerful and audience moving set.  It felt like a music festival vibe with Dash than any Vegas pool party I have ever been to.  The result, one of the craziest pool party experiences I have ever witnessed in Las Vegas.  The pool was overflowing with people dancing throughout the day and getting a table was impossible if you showed up without a reservation.  This was an event that everyone who considered themselves a Vegas daytime-clubber wanted to be at.  Those who were there witnessed the first Winter pool party in Vegas, and quite possibly the craziest. 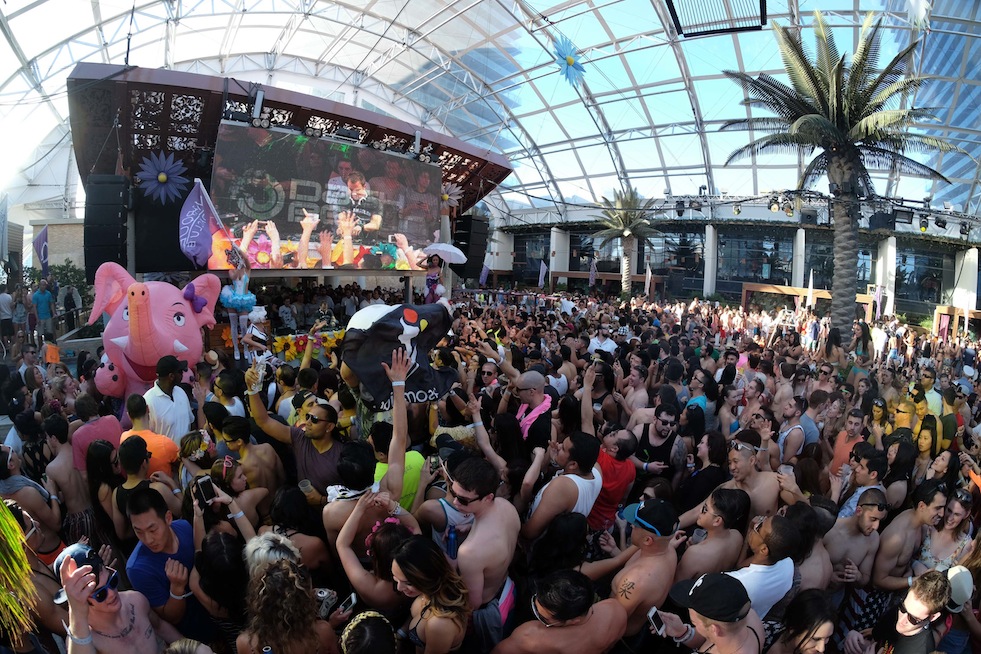 Failing to recognize that change is constant in Las Vegas but also necessary to stay relevant has emptied the floors of many nightclubs on The Strip over the years.  Marquee on the other hand remains one of the premiere locations for entertainment and partying.  The desire to be innovative is clearly showing itself in the lineup that Marquee has been trotting out the last few months.  When Insomniac announced that the Halfway to EDC party would be happening at Marquee no one was surprised.  What really caught everyone’s attention was that it would be outside in February.  The only place that could happen is under the Dayclub Dome.  Over the weekend Marquee featured Dash Berlin, a heavy weight in the EDM scene and a DJ who rose quickly to fame thanks in part to previous EDCs in Las Vegas.  Marquee also featured a 3 AM to 5 AM late night set by deep house guru Jamie Jones.  This is the type of after hours set that brings in the people who really know their electronic music- an underground meets industry type of party.  Then to top it all off, a party hosted by Bruno Mars on Sunday night only a few hours after the last few made it out of the Dayclub pool after Dash Berlin’s set.  Marquee has diversified it’s lineup, altered the party experience with ambitious new developments, and has kept patrons coming in and artists happy to be involved.  200 feet above the Las Vegas Strip, the Dayclub Dome is a statement that to remain the best, you have to keep getting better.