Markus Schulz is about to release his new studio album Scream on August 31st.  The highly acclaimed DJ/producer, host of Global DJ Broadcast, and owner of Coldharbour Recordings is set to launch on another world tour, but first he found a few minutes to talk with Rabbits about the upcoming release, working with Ferry Corsten, what happened at EDC, and how the insanity is just getting started.  Check out the interview with Markus, one of the world’s best DJs, who has sold out the biggest clubs in the world, but says things are just gonna get crazier.

Rabbits Black (RB): Markus, this is Andrew from Rabbits Black. Thanks for taking a few minutes to talk with us. First of all, I know everybody is asking the question, but how’s the eye doing?

Markus Schulz (Markus): Ah, much better. Not 100% yet, but I think it’s good enough to travel now.

RB: Well, that’s a big deal, considering how busy your summer is. Especially now, making this final push with Scream being released in a week. So, are you in the States right now?

Markus: Ya, it’s wild. With the new album coming out, this schedule doesn’t stop. 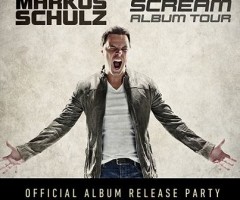 RB: Speaking of the new album, Scream, now that you’ve had a chance to play it in front of live audiences, what has the reception been like?

Markus: Fantastic! You know, the one thing I wanted to make sure with this album was that I was able to play these tracks in my live sets. Because I think it makes no sense to have these tracks being played on the radio, and people come to see you play, and you don’t play them in your live sets. So I road-tested every single track, and just wanted to make sure that every single track worked in the live setting.

RB: So, which tracks in particular have received the best response?

Markus: Well, some of the biggest ones, obviously “Loops and Tings”, the collaboration I did with Ferry Corsten is huge. And then there’s a track I did called “Finish Line” that’s really big on the album as well. And then, as far as vocals, there is a track on the album called “Nothing Without Me” that is blowing up big time.

RB: What is it like playing with Ferry Corsten? I saw the two of you play a set at Marquee in Vegas this summer, and it just seems like you have a great time performing together.

Markus: Ya, well, you know Ferry and I are kind of at the same point in our careers right now, where we’ve been around for a while; but when we got together, all we wanted to do was have fun. So, in that sense, all we are looking to do is have fun, and whenever he and I get together it’s always a crazy time. So, when we were working together in the studio, for example, at some points we were just dancing around the studio. It was a lot of fun. And I think that’s the biggest thing that I took away from the work I did with Ferry.

RB: Well, this album is pretty balanced between instrumental tracks and vocal tracks, but what was it like trying to pick out the talent for the vocal tracks? Did you write the song, and then find the artists after it was written?

Markus: No. Each song has a different story to it. Some of the singers that I worked with, I sent them a music bed and they wrote a song on top of it, and then we recorded it here in Miami. Other artists, like Adina Butar, she came to Miami and we were in the studio together, writing the music together. So it’s all different; each song has its own unique story, and, you know, whether its producing or how the song came about.

RB: Well, you’ve played so many festivals this summer, like usual, but also trying to get Scream out there, so which ones would you put at the top of your list?

Markus: Ya, well, you know Electric Daisy Carnival this year was very memorable…

Markus: It’s unfortunate that the stage got shut down an hour into my set, but all the stuff that went on around it made it very memorable. And a couple of weeks ago I did a festival in Germany called Nature One. Last year Nature One was probably one of my favorite gigs of the year, and this year I’d say Nature One was even better than last year.

RB: On the subject of Electric Daisy, what happened out there? Obviously that’s not how you planned it out?

Markus: Ya, well, I remember being up there on stage and seeing the wind knocking the LEDs and the trusses around, and thinking to myself, wow, this looks a bit scary. But I went on, and I focused on the crowd, and I did my set. Then when they came up to me and told me they had to shut down the stages, I didn’t fight them at all. I was just like, you know what, it’s good to think about the fans first, because if anything bad would have happened – you know, we’ve seen what can happen, like in Germany at Love Parade – so I would be devastated if anything like that happened, especially when I’m on stage.

Markus: Well, I think it translates well for everything. The nice thing about it is there are songs that accompany these tracks. There are some very talented singers that I work with, so there’s some substance to these tracks. It’s not just a riff that is good for the clubs. There’s a lot of depth to these tracks. You can listen to them anywhere.

RB: There’s a wide variety of songs on the album. Some are blowing up on the radio right now, but others are just nice to listen to during the day. Was that a concern of yours when you were making the album?

Markus: You know, when you release an album with 23 tracks, there’s got to be a balance. It can’t be 23 tracks all doing the same thing. And I think the fact that there are 12 vocal tracks and 11 instrumental tracks shows that there’s great balance on this album.

RB: Well, obviously this tour, and the album release, are taking you all over the world right now, but are you ever going to get the chance to slow down?

Markus: Haha. Nope. We’re going all out! And, the first quarter of 2013 we’re planning the Scream World Tour, so it’s going to be even crazier.

RB: Well, that’s crazy, but I know all your fans appreciate it. Good luck with the tour, and your UK double-header on Saturday, and we’ll be looking forward to the Scream launch next weekend.

Markus: Ya, thank you guys very much. Bye.

For more information on Markus Schulz, the Scream release, or upcoming tour dates, go to his official website, or check him out on Facebook. 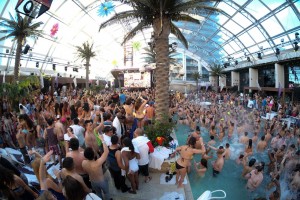 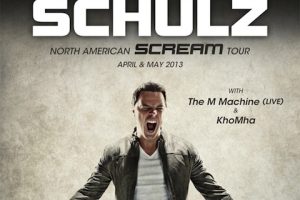 There’s a reason why we call Markus Schulz the rockstar[...] 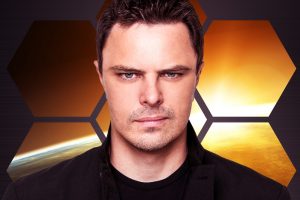 When we last caught up with Markus Schulz, we were[...]