Rivals of the Peacemaker will get classified as Americana folk, but don’t just write them off as another band in a genre that is already packed with radio favorites and sing along hopefuls.  The Chicago four piece is made up of an interesting husband and wife duo that brings their differing musical tastes together to make the sound of Rivals of the Peacemaker.  Take a listen to “I’m Gone” and the vocal melodies of singer Alex Watson will remind you of classic country songstresses, but a few minutes in and you are greeted with a one minute long guitar solo from Billy Watson.  And so it is for Rivals of the Peacemaker, balancing the musical tastes of Alex and Billy Watson to create a new sound that embodies American folk with the way they see it fit.  We caught up with the Chicago band before a few days before their Sunday performance at Lollapalooza.  Check out the interview here!

Our special onsite correspondent Colin Cooper met with singer and artistic leader Alex Watson on the Friday morning before Lollapalooza.  The band played The Grove stage at 12:00 PM on Sunday at the festival as one of the Red Bull Sound Select artists of Chicago. 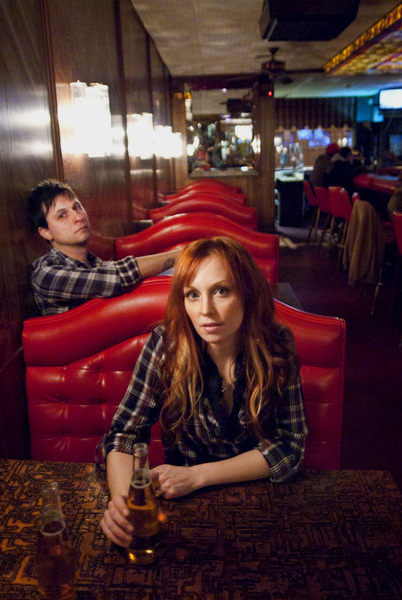 Alex and Billy Watson of Rivals of the Peacemaker

Rabbits Black: What did you have for breakfast?

Alex Watson: Coffee, chocolate, toast, and that’s it. So far.

Rabbits Black: What artist has had the largest influence on your work?

Alex Watson: This is weird, but Wayne White, who’s a visual artist. He’s also a musician, but right now I would say that his aesthetic in general has been affecting me so much. There’s a documentary called Beauty is Embarrassing about him.

Rabbits Black: You’re also a visual artist yourself. How does your work in that discipline influence your music?

Alex Watson: Usually one will inspire the other. So if I’m having a hard time with a drawing, I’ll just go and pick around on the guitar for a while, and it’ll relieve the problem that I’m having. Or I’ll watch something like Beauty is Embarrassing and it’ll inspire me to write a bunch of music. So the two things are really tied together.

Rabbits Black: What was the first album that you bought with your own money?

Alex Watson: It might have been Nevermind. Nirvana. Actually, I probably bought some other really lame stuff before that, but that was the first important one. I used to listen to what was on MTV. There was a lot of cheesy metal and a lot of New Kids on the Block and stuff like that. And then I saw the video for Smells Like Teen Spirit and I was like ‘What is this?’ I didn’t even know music like that existed. And I still love Nirvana.

Rabbits Black: What was your first concert?

Alex Watson: Willie Nelson. As a baby, just sitting on my parents’ shoulders. And I never saw him again until last year at the Chicago Theatre. And it was so good… so good.

Rabbits Black: If you couldn’t be involved in music, what would you pursue?

Alex Watson: Natural science illustration. It’s something I do on the side anyway. I basically draw specimens of things. You get a specimen from a museum, or maybe it’s for a medical journal, and you have to draw it exactly as it is. There’s a mathematical quality to that kind of art, where the purpose is to be as accurate as possible but also bring an aesthetic to it. It’s amazing. I’m in the Guild of Natural Science Illustrators. I’m not joking. It’s super nerdy.

Rabbits Black: Is there anything you listen to that you consider a guilty pleasure?

Alex Watson: I have a whole playlist called ‘I Like It, So What?’ That song ‘Blurred Lines’ by Robin Thicke is on there.


Rabbits Black: Who are you most looking forward to seeing at Lolla?

Alex Watson: Jake Bugg. I found him on Spotify and I just love that whole album. Also The Cure. I’ve never seen them before. And I wanted to see Queens of the Stone Age, but I’m going to miss it.

Check out Alex Watson and Rivals of the Peacemaker in in the music video for “Day After the Rapture”.  You can stay up to date with the band and their tour dates on their Facebook page.

Tags: Rivals of the Peacemaker