The Whigs - Enjoy the Company

Athens, GA trio The Whigs are set to release their fourth full-length album, Enjoy the Company, on September 18th. Produced by John Agnello (Dinosaur Jr, Son Volt, Sonic Youth) in the solitude of Dreamland Studios, a historic church in rural Woodstock, New York, Enjoy the Company is the band’s first record for New West Records. The album features ten tracks of pure celebratory rock and roll. Follow the jump for tour dates, and a LIVE STREAM of the new album!

A band known for their explosive live shows, The Whigs are currently on a three-month national headlining tour that will include a performance at this year’s Austin City Limits Music Festival. The Whigs spent most of 2010 and 2011 on the road with the Kings Of Leon & Black Keys (to name a few), performed for the Armed Forces on a USO tour of Germany and the UK, and put on memorable performances at Lollapalooza, Bonnaroo, Fuji Rock and T in The Park. 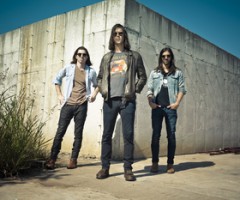 The Whigs, consisting of lead singer and guitarist Parker Gispert, drummer Julian Dorio and bassist Timothy Deaux, premiered their new album Enjoy the Company on Paste Magazine today, September 11. Listen to this new record a week before it’s September 18 release HERE. The Whigs will return to The Late Show with David Letterman on Tuesday, September 25, to perform their new single “Waiting,” which fans can download for free: http://newwestrecords.com/pages/the-whigs-download/

Check out their last performance on Letterman, when they played the single “Right Hand On My Heart”, here:

Tour Dates (more to be announced):