Though I’ve been enjoying listening to this band for about a year now, I was a bit skeptical that Walk the Moon would be able to pull off a headliner tour so early in their career.  Their first big label album (RCA Records) was just released this summer.  The average age of this crowd isn’t old enough to drink, and a good portion of them probably can’t vote either.  As an almost-thirty attendee, I was probably among the top 20 percentile at the concert in terms of age.  But the fact is that there is more to Walk the Moon than being really really really ridiculously good looking. The crowd was friendly and decked out in neon war paint – Walk the Moon’s tradition for lives performances as I’ve come to learn.  And no, they don’t spray the audience with paint.  This is a band that is among the top performers in my book.  The face paint thing might be considered gimmicky, but it is an easy and fun way to show your support, and whatever helps unite their fanbase, especially so early in their career, can’t be discounted or looked down on.

The last time WTM played in Southern California was at the US Open of Surfing in Huntington Beach over the summer, and while my schedule didn’t allow me to escape SD on a weeknight, I watched the livestream online.  With a ready-made crowd of thousands of surf fans, they opened for Best Coast with a set of about a half dozen songs from their self-titled album that debuted just a few weeks prior.  I wondered if they could get the same energy in the House of Blues that they had on a warm beach in the summer.  My doubts were laid to rest the moment they stepped on stage and opened with, “The Liftaway”, which does not appear on their album.  I guarantee that half the people there had never heard that song before (myself being one of them) but were already jumping and swaying as if it were an old favorite.  After that they launched straight into “Quesadilla”, the album opener.  This crowd needed no firing-up, they just needed the fuse to be lit. 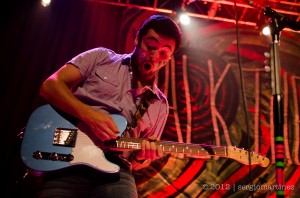 Every member of the band has stage presence.  Eli Maiman hooked the crowd with catchy guitar riffs.  Kevin Ray filled in the low end on the bass.  Sean Waugaman was on the drums.  Nicholas Petricca, the lead singer, led the way with the keys and tom-tom.  Every member had a microphone to fill in on vocals.  Pretty much every song on the album was played, each one amplified exponentially by the live environment.  If you gauge a band by their live performance, these guys take the prize.  The chemistry extended not just to each other but to the fans as well.  The catchy dance beats combined with rock and roll tone finds its place among bands like Two Door Cinema Club, The Wombats, and Young the Giant.  Distortion is kept to a minimum, allowing each instrument to ring through like a bell.  The four-person band has a tone for everyone, each member pulling their weight in providing an exciting environment and engaging experience.

The song of the night was my personal favorite, “Tightrope”.  It is not noisy, but it’s clean tones move like a bullet train.  WTM kept the train moving fast from the first song to the last.  The medium size of the venue fit the band perfectly, and I doubt you’d get the same quality show if you were to see them at a larger arena.  WTM continued feeding their fans treats, such as new unreleased songs that were written while they were touring Europe a few weeks ago.  Want to hear these songs before they get airplay? You’ll have to see them for yourself!  They finished the set with their top single “Anna Sun”, but were brought back out for a two-song encore that concluded with “I Can Lift a Car”.  Indeed, if you are a fan they played all your favorites by the end of the night, plus a few you’ve never heard before.  And if you’re not a fan, you will be after seeing Walk the Moon live.  There’s not much more that I can say about this band except that I can’t wait for their next album, so that way they’ll have more material for longer sets at future concerts that I will most definitely attend.  I am proof that you don’t need to be a high school or college student to enjoy this music.  If you like to dance and you like to sing along to fun music then this is a must-see show of the month.

Closing thoughts:  Recommend for anyone digging the new wave of dance-pop.  There are still a few shows left in California so get your face paint and get out there!

This author hasn't written their bio yet.
Sergio has contributed 3 entries to our website, so far.View entries by Sergio