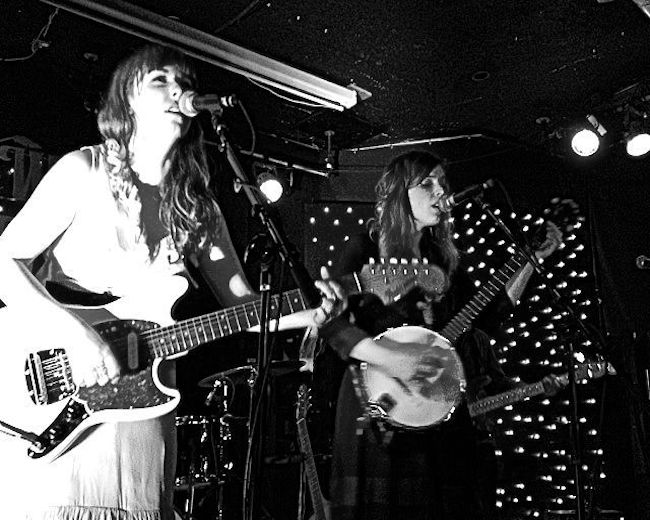 The Satellite was humming with a vibrancy that was palpable. A constant mid-range murmur laid freshly in the air and in my ears – its the kind of hum I would have expected in this place on a Saturday night, but this was Monday. Americana-Folk mavens, The Wild Reeds have clearly made an impression with their December residency. The packed room stirred with anticipation as they floated between the trunk and craft show in the back room and the band’s sound check up front. After assembling their seven pieces (the typical five-piece have added a cello and violin for the evening) and wrestling with a stubborn mic,  Kinsey Lee, Sharon Silva, Mackenzie Howe took their place – a steady front, spread across the stage.

Their opener, “Clouds” began sparingly. It allowed for a discernible hush to roll over the murmuring crowd as Lee’s rambling banjo and voice delicately cut through the clutter. Slowly building steam, like a train departing the station, the song’s tempo built steadily churning as the womens’ three-part harmonies folded into one another. Propelled equally by the weeping strings of the violin, “Clouds” culminated with an ardent sense of anticipation which at once lifted the Silver Lake crowd up and just as suddenly plunked them back down as the song marched off its precipice and fell into the quiet night.

Lee, Silva, and Howe delivered earnest, sweeping harmonies in their aching lyrics without even a hint of irony. They shared a sound fraught with a kind of backwards, gleeful eeriness which marks the American experience.  It’s easy to get lost in the novelty and kitsch of Americana (it’s not often you see a harmonion on stage) however, these three front-women never once lost their way. In lockstep figuratively and literally, the trio all unwittingly and automatically marched in place together to their new song “Foreigner” and its metronome-like pulse. “Foreigner” and a few other tracks from the evening are new material off their forthcoming album Blind and Brave out next year. Despite the fact the album is yet unreleased, the cat calls and requests from the audience denoted an already-cultivated intimacy and infatuation with the material. Lee humbly noted that, “it makes us smile when our songs aren’t released yet and you already know their names.”

A December residency isn’t complete without the requisite Christmas songs of course, and The Wild Reeds treated us Monday night to a virtually a-capella take on “Silent Night”.  A take which let their intricate harmonies breathe new life into a holiday staple. Their best cover of the evening wasn’t any Christmas tune, but rather a song by a band who once frequented the Satellite (and Spaceland) stage – Local Natives. Perhaps an imprint left on the band from their work with Local Natives producer Raymond Richards, or simply a choice for the way it lends itself perfectly to their lofty harmonies. In either case, The Wild Reeds exposed “Ceilings” for the beautifully raw and stark lullaby that it is.

The Wild Reeds will be at The Satellite for the remainder of their residency Monday 12/23 and 12/30.