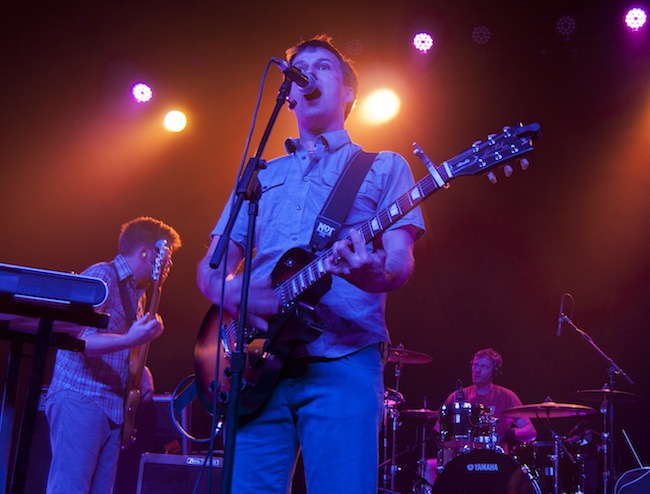 The Dismemberment Plan rolled into Los Angeles wrapping up their fall tour promoting their first album in 12 years, Uncanny Valley.  With the album, like the concert, the band did everything that it needed to do without necessarily fulfilling the legend that’s sprouted up in the band’s absence.

Emerging from Washington D.C., the Dismemberment Plan is a panacea of post-punk, prog rock, freestyle delivery and a sugar high.  That combination shouldn’t work, but the D-Plan sounds natural and organic.  Vocalist Travis Morrison’s spastic delivery is perfectly complimentary to the sinewy speed of Eric Axelson and Joe Easley’s rhythm section – and if anything they manage to wind themselves even tighter live.

The show at the Fonda was pretty lightly packed – even with the balcony closed, it wasn’t hard to move around on the floor.  But despite the light showing, Morrison and company were happy to be there.  Morrison’s boyish face frequently emitted an appropriately innocent smile as he joked around with the audience and Axelson about his lackluster setlist building skills.

This dialogue on a precedent established by opener Telekinesis.  Halfway through their set, the one-man act Michael Benjamin Lerner (backed up by a few touring musicians) jumped up from his drum set and asked the scattered audience for questions.  Unprepared journalists, the crowd couldn’t think of any questions more hard-hitting than “How are you guys so cute?” but the light chatter helped to open up the crowd to enjoying the music and Telekinesis’ solid set of power-pop ditties that did more to wake up the hundred or so audience members that showed up early enough.

The sound was decent and the Dismemberment Plan was happy to be there, but the show rarely recreated the electric, chaotic sound that defined their signature album, 1999’s Emergency & I – an album that makes right-angle turns with its chords over and over again within the span of a single measure.  That’s a difficult sound to recreate without hard, sharp production.

But the audience didn’t seem to mind.  It’s been over a decade since the band played in Los Angeles, and the Dismemberment Plan got the hero’s welcome its fans have been wanting to give them since 2003.