The Adicts haven’t slowed down! After over 30 years in the business, this light-hearted British punk act obviously knows how to put on a show. Maybe it’s the high energy, non-stop stage show, the crowd of adolescenet punks singing along to every song, or the fact that Keith “Monkey” Warren’s stage makeup keeps his look eternally young, but these Brits sure don’t rock like they’re over-the-hill. Let’s put it this way, if you had your doubts about the Mad Harlequin of Punk Rock and his Clockwork Orange Crew still having “it”, I’m about to put them to rest.

For starters, touring with opening act World/Inferno Friendship Society must be kind of like bringing your friend that you’re objectively cooler than to a party. While this Brooklyn based circus-anarcho-punk band claims over thirty members in its roster, only seven or eight were performing at the Dallas House of Blues. The large, rotating roster may help to explain the inability of the band to pick a sound and go with it. This eclectic set came off like Crispin Glover’s drug-induced, wet nightmare about what the Mighty Mighty Bosstones would be like if they had a more eloquent lead singer and a thing for Czech folk revival. Much like the preceding analogy, the band’s sound is somewhat convoluted and doesn’t quite work. That’s not to say there weren’t good songs, and their opening showed off the band’s ability to play it up to the crowd and, most importantly, put on a show. However, as their set went on, the wildly varying styles, rambling stories, and generic “counter culture” ranting all garnered more attention than the best parts of their music, which were too few and far between.

On the other hand, there is nothing that does not work about the Adicts. The quivering anticipation began with various members of the band teasing the crowd by appearing in the Green Room window which overlooks the open area in front of the stage. The band made their way out in their traditional Clockwork Orange get ups and after a little bit of instrumental tooling around, introduced Monkey Warren in all of his sequin-suited, joker-faced glory. Opening with “Joker in the Pack”, Monkey launched decks of over-sized playing cards into the crowd while retaining the joker cards for himself. From there, the show was a furious blitzkrieg of fun and entertainment. None of their classic, hardcore punk tunes like “Let’s Go” or “Numbers” had lost any of their edge, in fact, “Chinese Takeaway” may have gained some. Changes in pace to slightly calmer songs like “Troubador” and “Bad Boy” did not derail the momentum either. Add to this a non-stop barrage of bubbles, toys, confetti, and ticker tape being thrown into the crowd while Monkey performed magic tricks and added a ridiculous number of streamers to his mic stand. When topped off with a band whose members appeared genuinely happy to be performing the whole time, you have an incredible show. 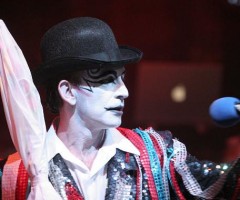 Other highlights included the invitation of all of the girls in the crowd onto the stage for a dance competition while the band played “Bad Girl”, with the Warren awarding the winner with a “stuffed monkey with no genitalia, much like myself”. This bit also included a kick line with all the ladies, and hugs and bowler caps all around from Monkey before they were ushered off the stage. When Monkey left the stage for a costume change, veteran guitarist Pete Dee Davidson led a role call for the rest of the band and gave them a chance to get some love from the audience. This all led into the finale, in which Warren rejoined the band on stage in a baggy, multi-colored harlequin outfit and big floppy hat riddled with holiday lights, and performed fan favorites “Viva la Revolution” and “Steamroller”. In addition to the peak crowd energy at this point, Monkey Warren also managed to empty multiple cans of silly string onto the mic and produced a foam machine which he used to cover drummer, Michael ‘Kid’ Dee Davison and his kit before the songs were over. After a brief clean-up of the stage, the band came back on for an encore performance of “Who Spilt My Beer” and a few others, while also distributing beach balls to the crowd. Amazing.

The only possible critique of this performance is more of a warning: in addition to your archetypal mosh pit annoyances, such as Shirtless Napoleon Complex, Girl Who Doesn’t Know What She’s Getting Into, and Old Strong Guy Fighting Kids the Only Way He Legally Knows How, foil ticker tape/confetti/bubbles make for a very slippery floor. This matters when one is in a mosh pit, even with tasteful punks, and footwear with traction is a must. The only other thing one must bring is a ticket and a good attitude, and the Adicts will definitely make it worth your while.

For more information on The Adicts and upcoming tour dates, visit their official site.