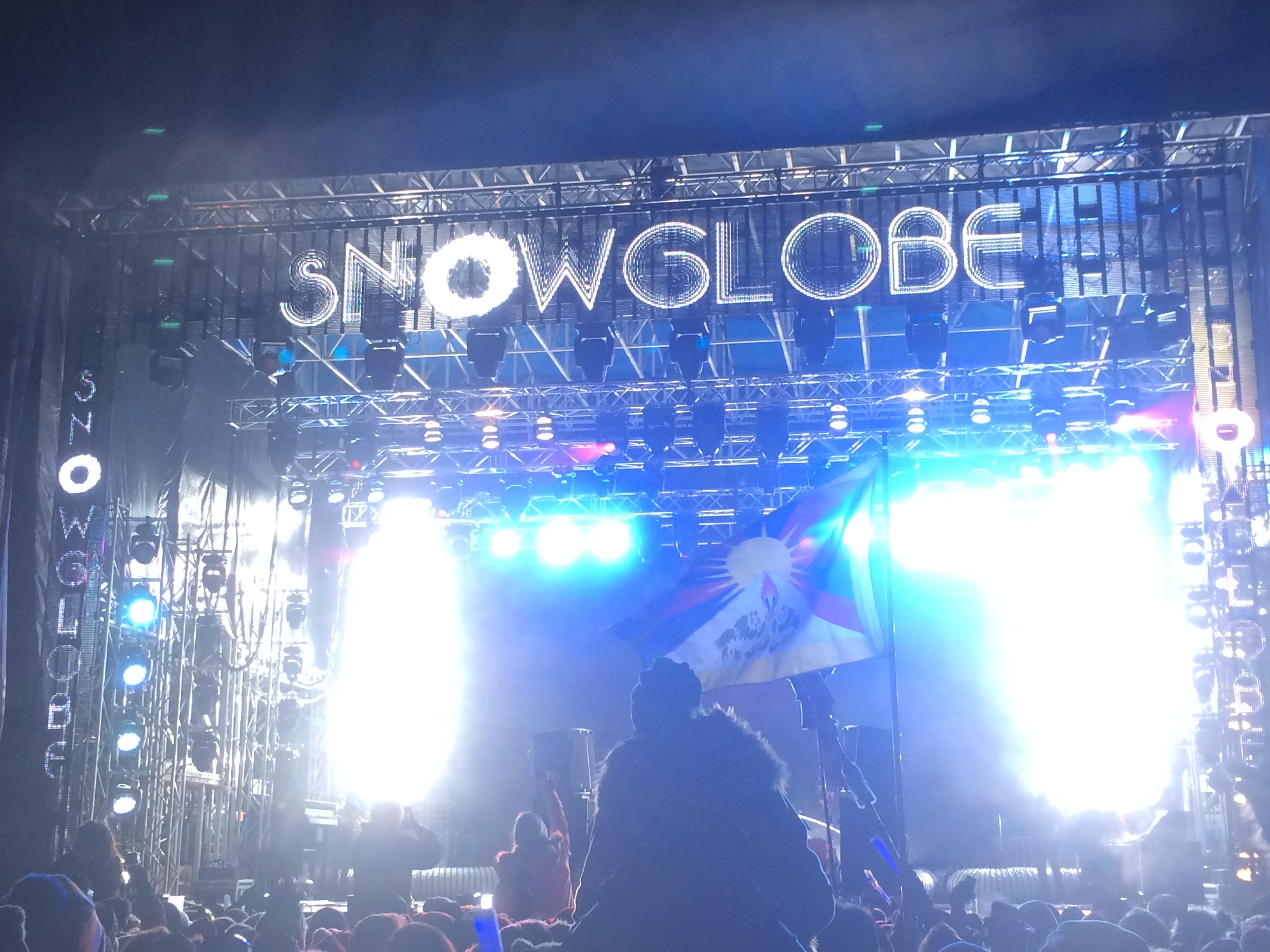 Leave it up to tens of thousands of eager rave kids from all over the West Coast (and beyond) to turn one of the coldest weeks of the year in South Lake Tahoe into a blistering hot dance party at this year’s SnowGlobe Festival.  Oh yeah, and the 50+ artists on the lineup definitely helped matters as well.  There was perhaps no better image to capture the mood than while exiting the grounds after each night of the 3-day festival, where gloves and hats were strewn as far as the eye could see, as if the patrons had overdressed for the single digit weather and tossed aside layers of clothing as the mercury started rising in the massive crowds.

The first night kicked off with two unbelievable back-to-back performances by Disclosure and then the dubstep whiz-kid, Sonny Moore, otherwise known as Skrillex. While each of these performances were definitely as badass as one would expect, and certainly entailed all of the visual bells and whistles, the dark horse of the night was actually over in the Sierra Tent between 7:15 and 8:15—that would be Bro Safari. The Bro throwin’ it down.

From the minute—nay, second—that Bro took the stage, it was a whirlwind of trap bangers that nearly leveled the jam-packed crowd, which was smushed into the barely-ventilated tent like giddy sardines.  And let’s just say that people lost their damned minds. Every time the rise would give way to an epic drop, people threw their hands in the air and gave out a collective “OHHHH!” as if it took them completely by surprise. And like a Barney Stinson mixtape, it was all rise, baby. But the fact that it was the first night meant that people had serious energy to dispense, so the sustained amplitude was nothing but welcome. For those that stayed for the entire Disclosure set, take note: the next time Bro Safari is on the bill, you better get your ass over there, if not just for a brief—but insanely fun—minute.

Skrillex was amazing as always. He went through the full gambit of his hits, almost all of them as “turnt up” remixes, because if the crowd got too still, the cold took over. Just to make sure, Skrill asked if we were keeping each other warm at the outset of his performance. But rest assured, nobody was complaining; we were each too lost in the moment. It was as if this were somehow planned…

Each night after the Main Stage and Sierra Tent shut down, the last vestiges of the party would make it over to the only venue still open—the Igloo Tent. This was the quintessential chiller tent, with low key jams banging until roughly 1am, and a large indoor drink table that was pretty much slammed as much of the revelers expectedly packed their way in.  Aeroplane was spinning at the table up front, and when things finally wrapped up, people made their way out the back entrance to find an unexpected, splendid surprise: it was snowing. Not only that, they were enormous, pristine, beautiful snow flakes, gently falling as if by some holiday miracle. It LITERALLY looked like we were in a giant snow globe.

The second night was by far the biggest and best one. We’re talking Djemba Djemba, Phantogram, Branchez, Classixx, Flux Pavilion, Porter Robinson, and Odesza. Therein lied a dilemma many fesetival-goers know well: how to arrange your night so that you don’t get a taste of FOMO, but this time with added element of it being the coldest night of the festival, dipping down into the negatives with the wind chill. Luckily, all the stages were pretty close together, so even despite the biting cold, it was never too hard to break from one crowd and make your way to another set. In this case, I started the evening with some more trap music in the Igloo Tent, and Djemba and Branchez were no joke. They took the torch from the mantle and ran with it, leaving everyone hopping up and down like lunatics, and utterly breathless by the end.

Next was an absolutely unforgettable performance by Flux Pavilion, who—like Skrillex—held nothing back. It was hodgepodge of seething laser synths, flying atop the growling, blaring sub frequencies. Two songs in particular—“Bass Cannon” and “Do Or Die,” featuring the rapper/comedian/actor Donald Glover, otherwise known by his stage name Childish Gambino—made the crowd erupt into cheers and ecstatic shuffling. It was itself a crown jewel of a performance, except that the headliner hadn’t even played yet! The headliner that second night was the prodigal son, Porter Robinson.  And his set was epic…there’s really no other way to describe it. It was a rollercoaster of highs and lows, emotion-packed interludes followed by chest-clutching glitch drops. And it was at all points interwoven with live percussive instrumentation, leaving some scratching their heads at how one man was creating all this sound. For anyone who had not yet seen Porter live, this was truly a sight to behold. No doubt, he made some new fans that night. And for a number of people, one Flux performance wasn’t enough, so the MontBleu Resort was the place to be after the festival grounds closed down. The intimate setting was perfect. Branchez took the stage first, and set the mood with blistering dubstep and heavy, incensed trap music. Flux pulled a second rabbit out of the hat, and when 2am rolled around, it was time for bed. Dear lord, it was time for bed.

The third and final night was the most crowded, as it was the only night that fully sold out. But that makes sense, considering that it was new years eve. Now, for anyone who has attended a three day festival, you know what that third day feels like. Your body is begging you not to imbibe and to just take a freaking seat for the evening. But alas, you force down some redbull (and vodka), listen to Queen—We Are The Champions, slap your face a few times, and put on your rally pants. And that’s exactly what happened with basically all of the patrons that night, as you could see the wear and tear written across their faces, but each and all were ready for one last round of dancing. Zedd knows how to warm things up!

Zedd kicked off the evening with a set chock-full of singles, from recent pop-infused releases such as “Break Free” (with Ariana Grande), to his older electro house hits, like the videogame-inspired “The Legend Of Zelda.” It was uplifting performance, and just what everyone needed to get in the right frame of mind for the final night of  2014.

Trippy Turtle and What So Not then played back to back in the Sierra Tent, and kept the crowds jumping around to more stripped down, bass-heavy bangers. With the number of people in attendance, it was nearly impossible to even get inside though, so it was better (albeit also far colder) to just hang out towards the back with the peeps getting food.

Next up was a somewhat out of left field but nonetheless oh-so satisfying set by rap star Atmosphere. Perhaps surprisingly, his edgy brand of hip-hop fit right in with the rest of the tunes being dispensed that week. It also provided a brief reprieve from the rest of the more or less vocal-less electronic music. The event organizers probably took a page from last year’s event, which featured none other than Snoop Lion, by putting this guy on the bill. And he knocked it right out the park!

Finally, the set that many had been waiting for all week: Flume’s midnight NYE performance. And without a doubt, it lived up to the hype. Flume took the crowd on a wild ride in much the same way that Porter Robinson had 24 hours earlier, with long, meticulous builds to breathless, utterly euphoric highs. The ah-ha moment happened at midnight (of course), when just behind the tree line of verdant sequoias, fireworks burst into the sky like magic balls of flame. It was stunning, and I would be a liar if I said I didn’t get a little teary-eyed from the entire spectacle.

In all, this was an event for the ages. There really is nothing like having three days and nights of being entirely in the moment, while hanging out in one of the most gorgeous places on earth. Seriously, do yourself a favor and get to SnowGlobe 2015.