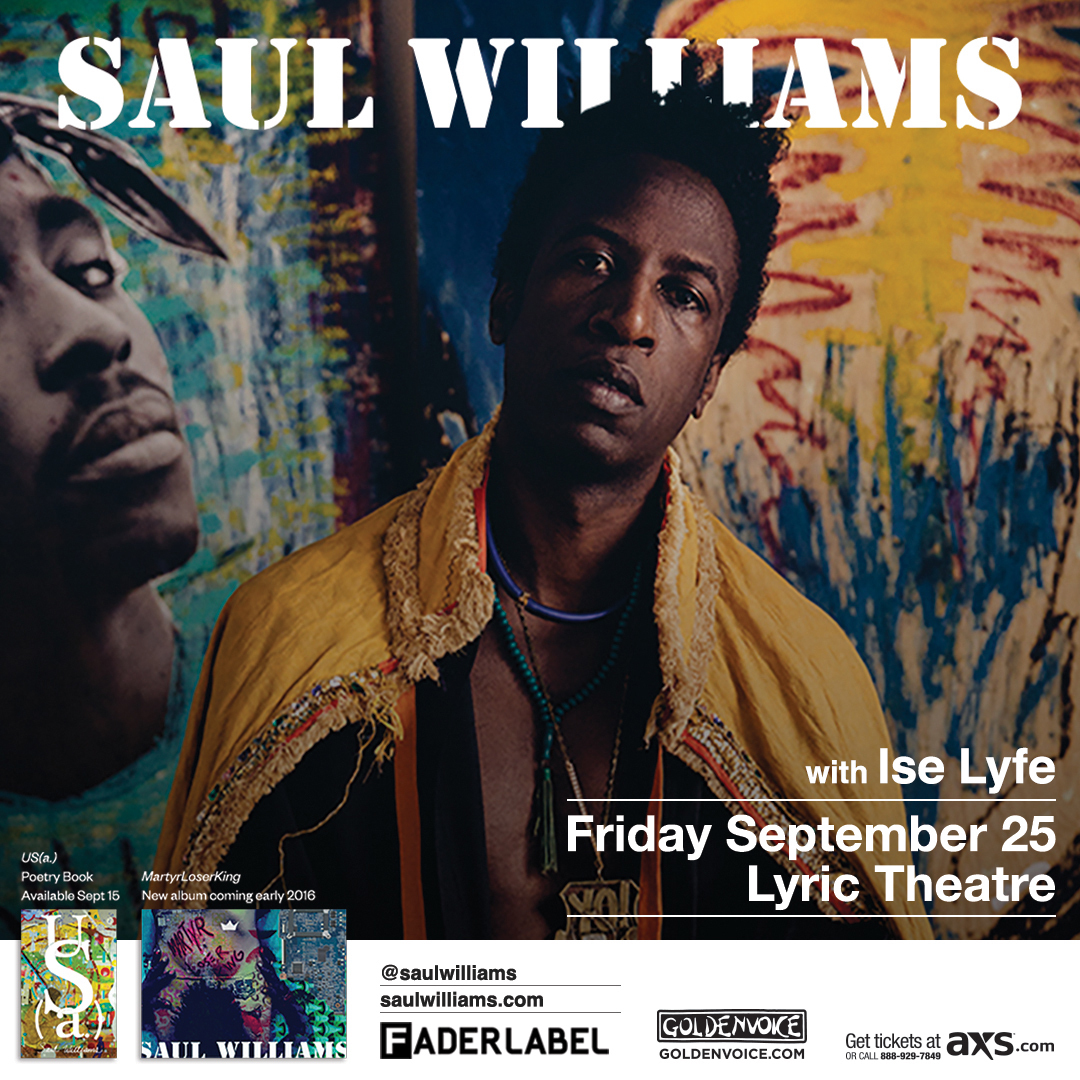 The intimate Lyric Theatre on La Brea Avenue in Los Angeles was the perfect venue for a night of elite spoken word poetry. The reformed playhouse has low ceilings, lower lights, and the kind of acoustics intended for stage theater that magnify a normal voice to the point where it fills every corner of the room. This is pretty important when there is little to no music at all. Just a low base line and the storyteller’s words.

Saul Williams is one of the great open mic poets and stage performers of the past 20 years. He also has a strong hip-hop influence and has released 8 albums and collaborated and toured with the likes of Trent Reznor, Zack De La Rocha, The Fugees, Erykah Badu, De La Soul, and Allen Ginsberg.

On Friday night he stripped away all of the heavy beats and base lines that accompany his more well-known hip-hop tracks and gave us all a night of pure open mic fire. Onstage Saul admitted to the audience the vulnerability that accompanies an open mic night, telling the crowd “I feel naked with silent poetry, music is like clothing to me.”

It was a powerful performance in support of his new album MartyrLoserKing:

MartyrLoserKing has just tagged his screen name onto the White House lawn via remote drone. He’s working from a remote e-waste camp in Burundi, Central Africa, neighboring the more well-known Rwanda, with equipment scrapped together from our old Dell PC towers and Sidekick IIs. Homeland Security, the NSA, and the CIA are tracing his signal back to a place that isn’t on the map or on the grid, and the alert level rises when he hacks NASA just to show he can do it.

At least, that’s what Saul Williams will tell you when you ask about his upcoming album and the story it’s inspired. Written and recorded between Senegal, Reunion Island, Paris, Haiti, and New Orleans and New York, MartyrLoserKing is a multimedia project that engages the digital dialogue between the 1st and 3rd worlds, and the global street sounds that yoke the two. “In Senegal, I was buying

Saul wasn’t the only performer that made an impression. Relative newcomer Ise Lyfe held his own even when compared to Saul and received numerous roaring ovations from a poetry crowd, which is saying something. Lyfe’s often political and racial rhetoric was conveyed through vivid storytelling and frequently humorous anecdotes.

Credit also needs to go to the revamped Lyric Theatre which has seamlessly transformed itself from a community playhouse to an excellent venue for live music and unique performances like we saw Friday night. It is only a special events venue right now but we’re hoping for great things in the future from this hidden gem.