It wasn’t cheap, it wasn’t even a band whose music I follow anymore, but it ended up being more than worth it.  The Red Hot Chili Peppers performed at Club Nokia last night, an extremely small venue show for California’s most popular rock band.  We were in the pit at Club Nokia, putting us dead center with about 200 other fans for the benefit performance.  Fans shelled out a lot to be at this show, but its pretty easy to spend the money when its going to a good cause- The Silverlake Conservatory of Music.  With pit access and an accomplice whose favorite band ever is the Chili Peppers, the night began with the new single “Monarchy of Roses”.

The Red Hot Chili Peppers were one of those early college bands for me.  Instead of listening to The Dave Matthews Band (always sounded horribly boring to my ears) or fawning over Bob Marley’s Legend, I listened to the Chili Peppers.  I was a freshman in college, and when you are trying to find the music that would distinguish you from the other dorm rooms, I went the way of the California rockers.  It was perfect for those first few years, and even as my taste in music changed, my appreciation for their music did not.  Fast forward a few years, and the only thing coming out of my room was Queens of the Stone Age, Nine Inch Nails, and Embrace The End.  Things changed.  When Stadium Arcadium was released, I fully realized that the music of the Chili Peppers no longer interested me.  I gave it a listen all the way through, and quickly moved on.  Which is why last night was going to be an interesting experience no matter what.  My musical tastes had changed, but there was no denying that The Red Hot Chili Peppers were one of my favorite bands for many years in my life. 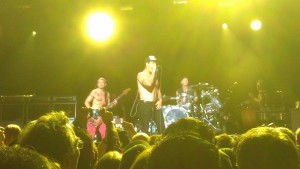 I was admittedly excited to finally see Flea, Chad and Anthony perform, but if you asked me the best show Club Nokia booked in 2011 was Motorhead with Valient Thorr.  The RHCP fans at Club Nokia brought the mood to a nervous frenzy as the lights went down on the gear on stage around 9:35 PM.  Each member of the band walked on stage to a raucous cheer, sitting quietly in the dark for a few moments.  That would be the last leisurely walk on stage the whole night, as the band opened to their new single “Monarchy of Roses”. 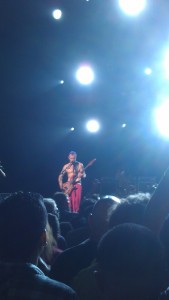 Flea is a monster on the bass, the driving force behind their live shows.

The crowd swayed back and forth, seemingly already knowing the proper reaction and correct lyrics to a song released only a few hours before the show.  As a new song, it was performed well, but it was definitely the opener to the real show.  As soon as Flea started to pluck his bass with the sounds of “Can’t Stop”, the show had truly begun.  Wow, Flea and Anthony Kiedis are performers!  To be honest, two of the most engaging live performers I have ever seen.  Whether you like, love or hate their music, there is no denying that Flea, Kiedis and drummer Chad absolutely believe in it.  They perform with the energy and spunk that you imagine they did in the early 90s when they were still playing clubs.  The only other huge band lead I can think of who dances more on stage than Kiedis is Scott Weiland- and Kiedis probably has him beat (you don’t count Thom Yorke).  The show followed the formula of one new song from I’m With You, followed by a classic or hit from the other albums.  While this allowed the band to perform many of their new songs, it killed the raucous flow and energy that the classics provided.  “I Like Dirt” was another throwback, allowing Flea to freak out all over the place- the best moments of the show for sure were his absolutely phenomenal bass work.  Flea destroys the notion that your bass player has to be the most boring guy in the band.  The set included classics such as “Californication”, “Soul To Squeeze”, and “By The Way”.  I know they didn’t have enough time to play everything, but it’s interesting to note they only played one song from Stadium Arcadium– personally I would expect that album to get less play in the live catalog as time goes by.

I can’t lie, the Chili Peppers were pretty damn awesome live.  There is something about Flea, Anthony and Chad that makes you really believe in their music and performance.  They seemed to be having an amazing time on stage, which could have been due to the genuine charity event they were putting on.  100% of the merchandise sales last night went to The Silverlake Conservatory of Music– that’s pretty awesome.  The show felt unique and special enough to warrant the high donation tag.  Even as a fan that has moved away from the Chili Peppers music, I was trapped in the presence of amazing live performers and some classic songs that will go down in history as California-anthems.  The encore ended with “Give It Away”, another reminder that the Chili Peppers have made some of the most recognizable tunes ever.  At its’ best, the show made you realize that The Red Hot Chili Peppers still have the fire and energy that made them live favorites of the Los Angeles music scene.  The spastic energy of Flea and Kiedis feels genuine live, and it really makes the show.  There is no denying their stage presence, their historical impact, the uniqueness of last night’s event, and the fact that The Red Hot Chili Peppers still bring that iconic funk for their fans.