The crowd was more eclectic than your typical Friday night club show, with only a few of the neon-clad ravers that the EDM scene primarily caters to, most of whom look as though they have stumbled out of some Saved by the Bell acid trip.  Yet the explanation for this diverse group was obvious: it was merely a reflection of the equally varied style of the headlining act for which they came to see: Alex Botwin, otherwise known as Paper Diamond.

Paper Diamond is one of only a few producers in the industry right now who can successfully blend the various forms of electro dance music with the far rougher-round-the-edges genre of American hip hop.  Other notables include Pretty Lights, whose label actually released Paper Diamond’s breakout EP, Levitate, in early 2011, as well as Diplo (of Major Lazer fame), whose label Mad Decent released his sophomore EP, Wavesight.  But while Botwin hasn’t quite reached the level of notoriety of these two artists, he has been steadily building a loyal fan base in the past few years, and has gained serious exposure while grinding it out on the festival circuit this summer.  Indeed, first-time appearances at Bonnaroo and The Governor’s Ball have allowed the young producer to show off his knack for mixing silky smooth synths with a sledgehammer 808-laden drumbeat to a broader fan base – which is exactly the sort of (regularly attired) people that showed up ready to party well into the following morning at 1015 Folsom Nightclub on August 16.

Paper Diamond came out swinging for the evening, playing new material from his latest release, Paragon, which he notably released on his own label, Oak & Elm Records, to a packed room that was ready to bounce off the walls.  The vibe of the exuberant crowd only seemed to fuel Botwin, who kept the head-banging loops up-tempo for the duration of the show. Longtime and new fans alike no doubt appreciated the performance, which incorporated tracks from each of his three EPs, as well as brand new material.  And it was not hard to tell the extent to which Botwin enjoys being on stage in front of a sea of happy faces, which would help explain the rigorous schedule ahead of the producer for his upcoming Altered States Tour with Zeds Dead.

Thankfully, for anyone who missed his show at 1015 Folsom Nightclub, Paper Diamond will be back in California later this fall, with the last date of the tour set at the Rainbow Room in Fresno on Halloween night.  Also, he recently added a stop at HARD Day of the Dead, set in the L.A. State Historic Park, on Sunday, November 3, which will include as headlining acts Deadmau5, Calvin Harris, and none other than Paper Diamond’s former mentor, Pretty Lights.  Indeed, this two-day festival will be one for the ages, so make sure to buy your tickets while they are still available! 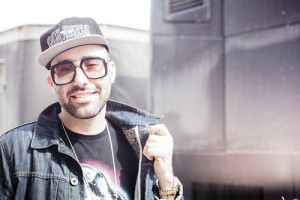