Live Review: Nicki Bluhm and the Gramblers @ the Independent SF 10/27

This past Saturday at the Independent, Nicki Bluhm and the Gramblers rounded out their recent tour presenting -“The Wedding Party!,” a show on Bay Area native Nicki and her singer songwriter husband, Tim’s,  5 year wedding anniversary. Concert goer’s were encouraged to wear wedding dresses and tuxedo’s for this one-of-a-kind celebration and Nicki and crew delivered a showcase no medium could predict. Read on to get some more details.

A ton of factors came together this weekend to set the stage for such an epic night.  I took a seat at the Mojo Cafe (which I highly encourage), across the street from the Independent about an hour before the doors opened, grabbed a drink, and watched the line of wedding attired fans begin to form outside. In the cafe, as well as up and down the street, simultaneous cheers could be heard as the Giants continued their sweep of the Detroit Tigers. SF city pride was swelling and fans were truly excited to see their own, Nicki and Tim take the stage for some folk rock dancing at such a momentous time in the cities history.

With the crowd wound N-B delivered from the moment she took the stage in her wedding gown; thanking crowd participants, sharing anecdotes from her wedding by the Golden Gate Bridge, and giving a “Go Giants” cheer here and there. The first two songs were  heartwarming and jazzy as she warmed up and then hit a strong stride, reminiscent of a laid back and smooth Linda Ronstandt or Stevie Nicks, and apparently she knows it- playing covers by Linda.

The night included great duets between her and Tim, multiple covers; including Hall and Oats, “I can’t go for that” where she played a bit of kazoo. Later in the night a gentleman came on stage to unveil the new M-81 Nick Bluhm signature microphone.  This set up a great toast from Tim, thanking Nicki for their 5th anniversary and complimentary champagne was given out.

All in all -fantastic talent and great interaction with those in attendance.

Interesting fact: The show was being recorded,  so hopefully this concert will be available for listening in the future. 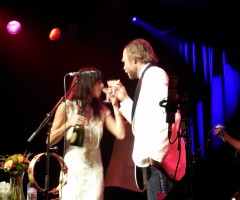 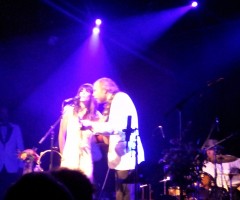 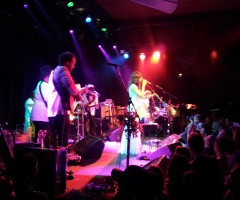 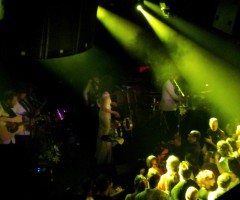 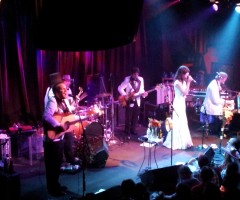 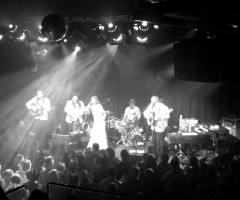 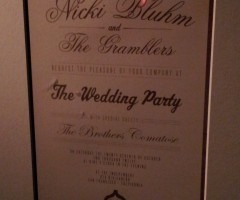 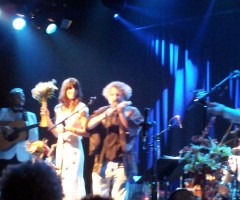