There were no big surprises this past Friday at Ruby Skye nightclub in San Francisco from House Producer/DJ Mord Fustang, just the steady thump of the bass line set below a series of whimsical synth chords, and the busy bee himself, Mord, tending to his equipment to ensure that beat would not quit until he left.

One cannot help but notice that Mord, who despite being named last year’s Breakthrough Artist of the Year at the Beatport Music Awards and recently appearing at some of the biggest music festivals in the country (which this year included Coachella), has thus far in his early career promoted quite a modest musical persona.  Hailing from Estonia, Mord’s onstage production is uncharacteristically low-key in comparison with similarly situated House music artists, which, alongside your garden-variety stage lighting, is comprised of merely a few displays on the front of his DJ table flashing his name in a few different colored patterns.  The most theatrical element of Friday night’s show was the occasional instance where two smoke machines on either side of the stage flared to emulate pyrotechnics.  And Mord’s festival performances have entailed more or less of the same level of inattention to the visual aspects of his set, albeit on slightly larger platforms.

If Mord’s onstage presence is understated, his real-world identity borders on enigmatic, which could be due to the fact that he first appeared on-scene as recently as 2011.  But considering that his real name has been quite effectively withheld from the Internet, as well as the fact that almost all of his official press photos have his face hidden behind some various piece of music production equipment or at the very least sunglasses and a hat, it appears as though he just might be trying to tell us something about himself, by not telling us much of anything at all.  Perhaps Mord is just letting his music speak for itself, but regardless of the motivation behind his conspicuously inconspicuous identity, his promotional efforts, or lack thereof, appear to be working out swimmingly for the young man (age unknown).

Yet Mord’s production style is as boisterous and assertive as any other mainstream EDM artist today, with the earth-pounding, four-to-the-floor drum lines that have come to define the House genre, and a signature blend of synths wobbles, chimes, and melodic arpeggios that immediately indicate his unique handiwork.  But for a genre that seems to be defined by artists who distinguish between themselves by the number of LED fixtures they manage to drag to each venue, it’s impossible not to credit Mord for his ability to do more with apparently far less.  His live performances are a testament to the club DJ of the past, with a touch of the modern of course: in place of those two-turntables-and-a-microphone are a couple of MIDI controllers and a laptop, to which Mord was glued throughout the duration of his performance.  It’s obvious he would rather spend his energy deciding when to make a filter sweep or add an additional layer of midrange accent notes in Ableton Live than engage in any crowd shout-outs.  But he didn’t skip a beat, and neither did anyone in front of the stage with their arms pointed up to the ceiling, bouncing up and down for hours. 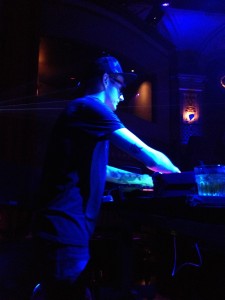 So not surprising in the least, when Mord eventually finished his set at exactly 2am, precisely as he was supposed to, he walked offstage for good.  There were no encores, no chants of “one more song”—it was merely time for the local late-night DJ to take over and cater to the few patrons that weren’t quite ready to stop dancing and go home.